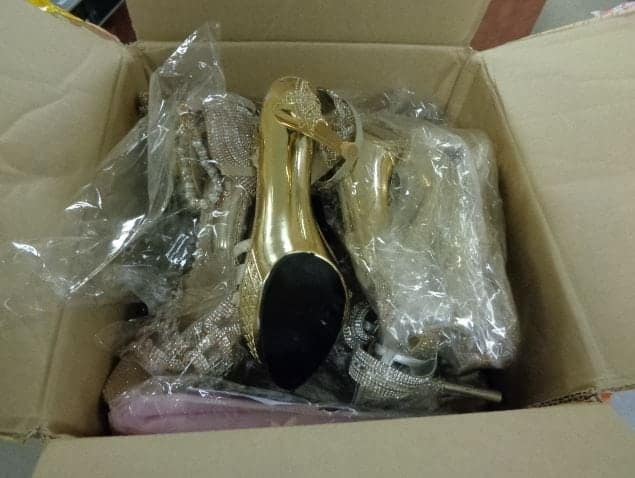 On July 18, border services officers conducted a routine exam at a cargo facility at the John C. Munroe Hamilton International Airport and opened a package from Pakistan. The package included various clothing items, including five pairs of women’s high-heel shoes. Officers decided to conduct an X-ray after noticing a smell emitting from the package and modifications to the soles of the shoes. The scan revealed the presence of unidentified rectangular objects varying in size in the soles of the shoes.

Officers separated the soles from the shoes and discovered wrapped, clear bags shaped to represent the soles. The substance tested positive for heroin. In total, the CBSA seized 799 grams of heroin concealed in five pairs of shoes.

The CBSA turned over the narcotics to the RCMP who conducted a controlled delivery and as a result the following individuals were arrested and charged:

“To protect Canadians and intercept illegal narcotics, CBSA officers use a combination of tools and training. This seizure shows how our collaborative efforts with the RCMP keep drugs out of our communities,” said Norm Sheridan, Acting Regional Director General, Greater Toronto Area Region, CBSA.
“Illicit drugs destroy lives and communities. The RCMP remains committed to keeping our communities safe. This is a good example of the RCMP working together with our CBSA partners to achieve this goal,” said Inspector Orest Hnatykiw, Officer in charge of the Toronto Airport Detachment, RCMP.
In 2017 to date, CBSA officers in the Greater Toronto Area Region seized more than 55 kilograms of heroin. If you have information about suspicious cross-border activity, contact the CBSA Border Watch Toll-free line at 1-888-502-9060.