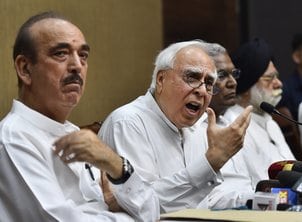 New Delhi (PTI): Seven opposition parties led by the Congress on Friday initiated an unprecedented step to impeach Chief Justice of India Dipak Misra, moving a notice accusing him of “misbehaviour” and “misuse” of authority.

Levelling five specific allegations, leaders of the seven opposition parties met Vice President M Venkaiah Naidu, who is also the Chairman of the Rajya Sabha, and handed over the notice of impeachment bearing signatures of 64 MPs and seven former MPs, who recently retired.

This is the first time that a notice of impeachment against a sitting CJI has been moved, even though previously there have been three cases of impeachment motions against apex court and high court judges in the last 25 years.

The only time the impeachment process reached the final stage was in 1993 in the case of Justice V Ramaswami of the Supreme Court when the final vote failed to get a two-third majority in the Lok Sabha. Ramaswami faced corruption charges.

The notice for impeachment comes a day after the Supreme Court rejected a bunch of petitions seeking an independent investigation into the death of Judge B H Loya, who was hearing the Sohrabuddin Sheikh encounter case.

The MPs who signed the notice belong to the Congress, the NCP, the CPI-M, the CPI, the SP, the BSP and the Indian Union Muslim League (IUML). The leaders of these parties earlier met in Parliament and gave final shape to the notice.

“We wish this day had never come,” senior Congress leader Kapil Sibal told reporters. He said the step has been taken “with a heavy heart” to protect the independence of the judiciary. “The majesty of the law is more important than the majesty of any office.”

Sibal said the allegations against the CJI cannot be ignored and if the notice for the impeachment motion is accepted “then as per convention, he has to refrain from discharging his judicial functions”.

Leader of Opposition in the Rajya Sabha Ghulam Nabi Azad said, “We have moved a motion for removal of Chief Justice of India under five grounds of misbehaviour.

“We are very much sure that the chairman will take action. We expect positive action from the chairman.”

The impeachment move was condemned by the BJP with Finance Minister Arun Jaitley accusing the Congress and its friends of using impeachment as a “political tool”. He termed the notice a “revenge petition” after the Supreme Court’s judgement in Judge Loya death case had “exposed” the conspiracy of falsehood.

Jaitley said that impeachment of a judge of the Supreme Court is to be done only in the case of either his incapacity or on proven misconduct .

“To use the power as intimidatory tactics when neither you have a case of ‘proven misconduct’ or the numbers on your side, is a serious threat to judicial independence.” he said in a hard-hitting Facebook post

The Trinamool Congress and the DMK, besides the RJD and some other parties, have backed out from supporting the move.

Sibal said the five allegations of “misbehaviour” mentioned in the impeachment notice include a “conspiracy to pay illegal gratification” in the Prasad Education Trust case and the denial of permission to proceed against a retired high court judge in the same matter.

He said the allegations also include the “serious charge” of “antedating” (backdating) of an order for listing of a petition related to the investigation against the Prasad Education Trust in the Supreme Court.

Another charge is of listing the petition against the Prasad Education Trust before himself, even when he was heading the Constitution bench, and doing so was against the convention.

The fourth charge pertains to a piece of land which Misra acquired as an advocate by giving a “false affidavit” and the plot was surrendered in 2012 when he was elevated to the Supreme Court, even though orders cancelling the allotment were given in 1985.

The fifth charge relates to “the abuse of exercise of power by the Chief Justice in choosing to send sensitive matters to particular benches by misusing his authority as Master of the Roster with the likely intent to influence the outcome”.

Amid reports there were differences in the Congress over the impeachment move, former prime minister Manmohan Singh did not sign the motion. Asked about this, Sibal said, “We did not want to involve Dr Singh, he being a former PM.”

The Congress denied that the move was in any way linked to the Supreme Court decision in the death of judge B H Loya.

Once the notice for impeachment is submitted, the Rajya Sabha chairman will ascertain if there is merit or ground for moving such a motion or can reject it.

If the motion is admitted, then a three-member committee comprising a senior judge of the Supreme Court, a judge of a high court and a distinguished jurist is formed to investigate the charges levelled against the CJI.

If the committee supports the motion, it can be taken up for discussion. It must be passed by a special two-third majority of MPs in both the Lok Sabha and Rajya Sabha. After it is passed in both Houses, it is presented to the President, who can pass a Presidential Order for the removal of the CJI.