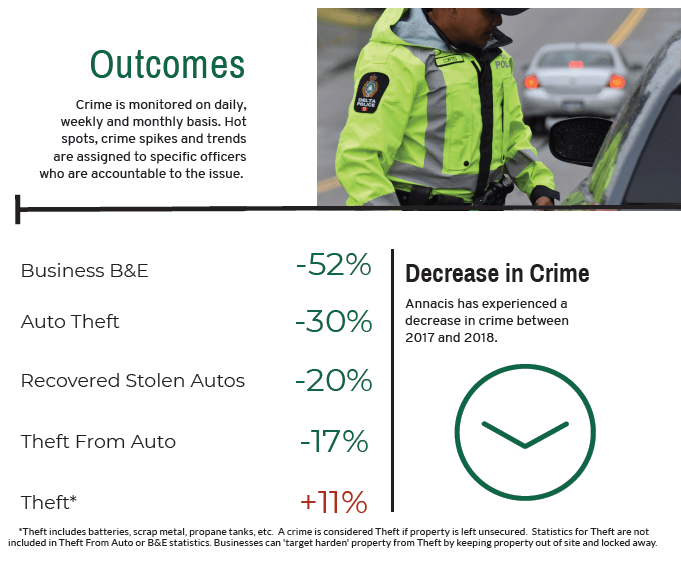 OVER the past summer Delta Police began to see a significant increase in thefts on Annacis Island, but increased patrols and business engagement seem to be working.

“We put our analysts to work on the problem, so we could have a comprehensive look at the stats and identify any hot spots,” says Staff-Sgt. Darren Dunn, who is overseeing the Annacis Crime Prevention Strategy.

The statistics showed that while there was a spike in battery thefts from delivery vehicles particularly, overall property crime was actually down about 20% from the previous year.

“Nevertheless, we knew we had a problem with a specific type of crime, so we made sure to increase our patrol resources in these areas, when the crimes were occurring,” said Dunn. “We also reached out to about 170 businesses, to begin talking to them about how this type of crime might be prevented.” A meeting with businesses is scheduled for November 28, and businesses are encouraged to join the Business Watch program.

The increased patrols are paying off, say Delta Police. On October 18, officers doing proactive patrols stopped a suspicious vehicle at 2:20 a.m. on River Road. Inside, officers found four vehicles batteries, resulting in in the arrest of two men – one for theft and possession of stolen property and the other on a Canada-wide warrant.

More recently on November 7, a police officer observed a vehicle in the Tilbury area around 3 a.m., which had been previously deemed a vehicle of interest to police. However, the driver took off at high rate of speed before the officer could activate his lights or siren. Shortly thereafter another officer located the vehicle again on Highway 91. More police came to the area to assist, and the driver was brought to a stop. The driver was arrested in relation to a mail theft from Annacis Island, as well as for flight from police, and dangerous operation of a motor vehicle.

“Prompt reporting of any suspicious activity is key for our officers, so we can respond as quickly as possible,” says Dunn. “We often get asked what qualifies as suspicious activity. That might be someone lingering too long by a fence or perhaps dumpster diving in the middle of the night. It may be legitimate, but it doesn’t hurt to call us to check it out.” He adds that businesses are encouraged to take a number of additional steps to increase security, such as improving exterior lighting, and adding video cameras.

“It takes a concerted effort by everyone – police, businesses, and the community at large – but we get solid results working together,” says Dunn.