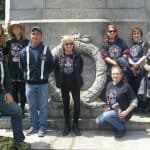 The second annual 2017 Tour of Duty saw hundreds of volunteers and special guests walking together to raise awareness of veteran homelessness, with at least 17 homeless / at-risk veterans identified during the day’s events. Since the beginning of June, VETS Canada has received new referrals for over 30 homeless or at-risk veterans, in addition to providing continuous aid and support in nearly 100 ongoing cases.

Kent Hehr, Minister of Veterans Affairs Canada (VAC) and Associate Minister of National Defence, attend the Calgary Tour of Duty to show his support, and to announce the extension of VAC’s contract with VETS Canada until March 2018.

Jim Lowther, VETS Canada Co-Founder / CEO and President said: “The second annual Tour of Duty was a huge success, allowing us to connect with 17 veterans in need of our emergency / crisis support. This is what the Tour of Duty is all about: encouraging awareness and creating conversations that lead to veterans in-crisis getting the help they need and deserve.”