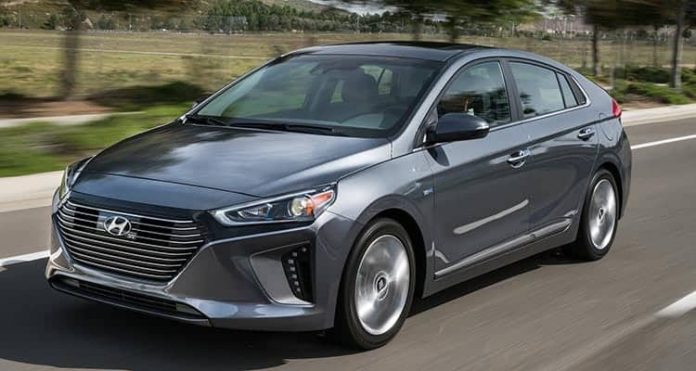 The new 2017 Hyundai Ioniq hybrid is fresh to the market compact five-door and arrives in either the gas-electric powered version, or a an all-electric version ( Check for availability in  some provinces.) Hyundai will also release a plug-in hybrid electric version later this year. The Ioniq is a pretty looking car, unlike some of the more polarizing hybrids out there and does not shout hybrid to all and sundry. It features a neat, cohesive typically sleek Hyundai’s design language.  The Ioniq Hybrid returns an impressive Transport Canada-estimated   combined fuel economy rating of between 4.1 L/100km and 4.6 L/100km combined, depending on the mode. The Ioniq certainly has its green credential, the Ioniq features interior part and textiles made from recycled eco-friendly materials to reduce weight and manufacturing waste

The Ioniq uses a new 1.6-litre four-cylinder engine, mated to a hybrid power system and lithium-ion-polymer battery. As with all hybrids, it can run on gasoline, electricity, or a combination of both, and it automatically switches between them as needed.  The gas engine produces 104 horsepower on its own, while the 32KW electric motor adds another 35 hp. The Ioniq bucks the trend by using a six-speed dual-clutch transmission instead of a CVT for greater efficiency.

All Ioniq models include heated seats, while the SE and upper levels also offer a heated steering wheel and rear seats which is rather generous of Hyundai.   Upscale Limited trim add an even more impressive roster of equipment.

On the road, the Ioniq offers a quiet comfortable ride. Initial acceleration from a standing start is via electric power alone—until the gas motor kicks in around in 30kmp. The transition from electric power to gas engine and vice versa is pretty seamless. It’s a rather sedate driving experience, with slight delay sometimes in the power delivery, but nothing that affects normal drivability. Overall, the Ioniq is very impressive, and another home run for Hyundai. It is good looking car with a simple, yet elegant interior. The price point and what you get in terms of value is stunning. Highly recommended.