INDIA’S High Commissioner Ajay Bisaria on Wednesday, June 23, placed a wreath at the Air India Memorial to the victims of the “Kanishka” [Air India Flight AI 182] bombing at Commissioner’s Park in Ottawa on the 36th anniversary of the horrific tragedy. Susheel Gupta, a representative of the victims’ family association, was present at the event. 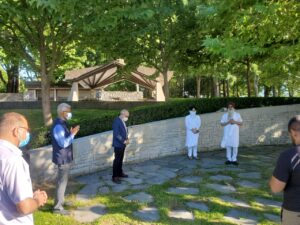 Bisaria said: “The terrorist bombing of the AI Flight 182 remains the worst terrorist attack on Canada. The majority of the victims were Canadians, and the bombing was the result of a conspiracy conceived, planned and executed in Canada. This was principally a Canadian tragedy, a British tragedy, an American tragedy, a global tragedy.”

He added: “It is fitting that Canada commemorates this day as the National Day of Remembrance for Victims of Terrorism. No religion, faith or cause can justify such violence. Our most enduring memorial to the victims will be rededicating ourselves to fighting and eliminating terrorism and militancy with strong determination and joint action.”

“The terrorist bombing of Air India Flight AI 182 off the Irish Coast on June 23, 1985, which resulted in the killing of all 329 crew and passengers (of which 82 were children below the age of 13) including 268 Canadian citizens, 27 British citizens, 22 American citizens and 24 Indian citizens, remains the worst terrorist attack against Canada. It also remains the biggest aviation disaster after 9/11,” noted a statement from the High Commission of India in Ottawa.

OPINION: India and Canada can fight the climate battle together