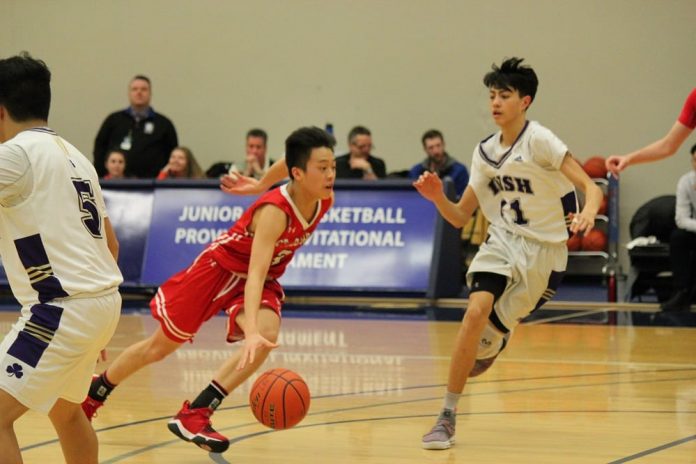 The first game featured #1 Vancouver College taking on #5 St. George’s Saints.
Vancouver Fighting Irish led for most of the game but the leads were never more than 5-7 points. St. George’s took over the game and never looked back, beating their arch rivals 71-63 for the chance to go into Tuesday’s 6 p.m. B.C. junior boys championship final against Surrey’s #3 seeded Lord Tweedsmuir Panthers. St. George’s last won the B.C. Junior title back in 2005; let’s see if knocking off top ranked teams continues Tuesday night.

The second game was Surrey’s #3 seeded Lord Tweedsmuir Panthers vs. the underdog Belmont Bulldogs (#23) from the Island. The Bulldogs were the Cinderella team, having beaten many of the top team to make it to the final four.

Lord Tweedsmuir Panthers came into this game with the thought that they did not want to be another one the teams that the Bulldogs were going to upset. And in the end, the Fraser Valley champions won the game with a convincing 69-37 victory.

Panthers now have their eye #5 seed St. George’s Saints on Tuesday in the 6 p.m. game. This will be the Panthers first-ever BC Junior Boys championship game.