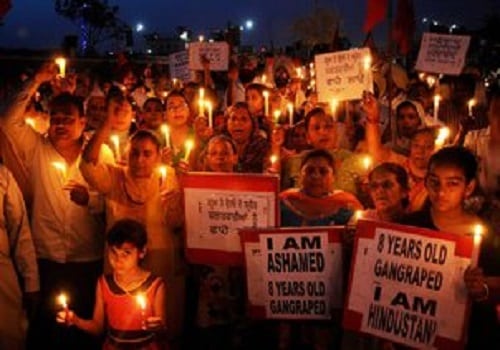 An eight-year-old girl from a minority nomadic community was allegedly held in captivity in a small village temple in Kathua district for a week in January this year during which she was kept sedated and sexually assaulted before being bludgeoned to death.

According to the chargesheets filed by the crime branch, the abduction, rape and killing of the girl was part of a carefully planned strategy to remove the nomadic community from the area. A separate chargesheet was filed for the juvenile.

Sanji Ram, the caretaker of the ‘devisthan’ in a village in Kathua, about 90 km from Jammu, is listed as the main conspirator behind the crime.

New Delhi (PTI): The Supreme Court on Monday directed the Jammu and Kashmir government to provide security to the family of the eight-year-old Kathua gangrape and murder victim, their lawyer and a family friend assisting them in prosecuting the case.

The apex court also took note of a plea of the victim’s father seeking transfer of the trial of the case from Kathua, preferably to Chandigarh and sought the response of the state government.

During the hearing, the victim’s father expressed satisfaction with the probe so far, conducted by Jammu and Kashmir Police and opposed the plea for CBI investigation demanded by others.

A bench comprising Chief Justice Dipak Misra and Justices A M Khanwilkar and D Y Chandrachud asked the state police to provide adequate security at the observation home where a juvenile accused has been kept and fixed the next date of hearing on April 27.

The bench said those policemen providing security to the victim’s family and others will be in plain clothes.

New Delhi (PTI): The Supreme Court on Monday agreed to hear at 2 p.m. two separate petitions including the one filed by Kathua-based lawyer Deepika Singh Rajawat, representing the family of an eight-year-old girl who was gangraped and killed, alleging that she was facing threat to her life for pursuing the matter.

Another plea filed by Delhi-based lawyer Anuja Kapur, seeks transfer of the sensational gangrape case from Kathua trial court to a local court in the national capital.

Kapur has also sought transfer of probe to the CBI, besides seeking exemplary compensation to the family of the victim of the case.

“We have already passed the order on Friday,” the bench said.

Jaising responded by saying that the earlier notice was issued to the bar associations but the issue at present relates to the threat faced by local counsel Rajawat.

The bench then agreed to hear the petitions at 2 PM today itself.

The top court had on April 13 taken strong note of some lawyers obstructing the judicial process in the Kathua gangrape and murder case and initiated a case on its own record, saying such impediment “affects the dispensation of justice and would amount to obstruction of access to justice”.

The apex court had said that it is a settled law that a lawyer who appears for a victim or accused cannot be prevented by any bar association or group of lawyers, for it is his duty to appear in support of his client.

The minor girl had disappeared from near her home in the forests in Kathua, on January 10. Her body was found in the same area a week later.

Jammu has been on tenterhooks since the brutal incident. The bar associations have been opposing the action against the accused, alleging that the minority Dogras were being targeted.

Lawyers took to the streets shouting slogans and trying to block the road outside the court where the charge sheets have been filed.