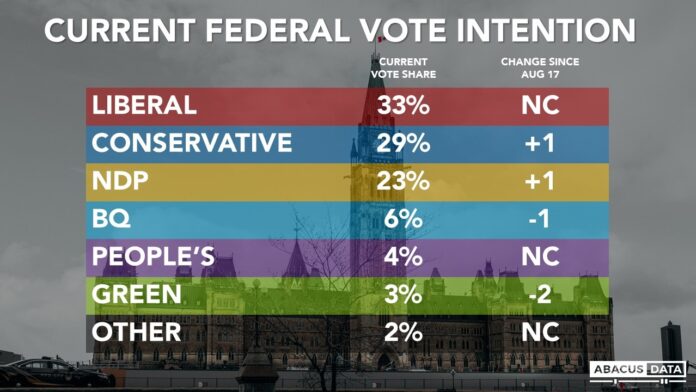 After the first week of the campaign, here’s what we are seeing:

Liberal Leader Justin Trudeau enjoys a positive impression among 39% and negative impressions among 42%, for a net score of -3. This is unchanged from last week. Regionally, Trudeau is +2 in BC, -41 in Alberta, -21 in SK/MB, 0 in Ontario, +9 in Quebec, and +11 in Atlantic Canada.

In terms of whether people’s views are improving or declining of the three main party leaders, we find Mr. Trudeau has the lowest momentum score while Mr. Singh has the highest.

If the election were today:

• The Liberals would win 33% of the vote (unchanged from last week, and the same result they got in 2019)

• In Manitoba and Saskatchewan, the Conservatives lead by 9 over the NDP and Liberals.

Vote By Those Who Say They Definitely Will Vote

Among the 72% of respondents who said they would definitely be voting, the Liberals and Conservatives are tied at 31% with the NDP at 22%. The BQ is at 7%, the People’s Party at 4%, and the Greens at 3%.

Right now, 60% of decided voters say they have made up their mind and won’t change while 40% say they could still change their mind about who to vote for.

The survey was commissioned and paid for by Abacus Data Inc.

(The VOICE is carrying an abridged version)

For the full version:

Liberals ahead by 4. Erin O’Toole making some progress improving his image while NDP support continuing to rise.