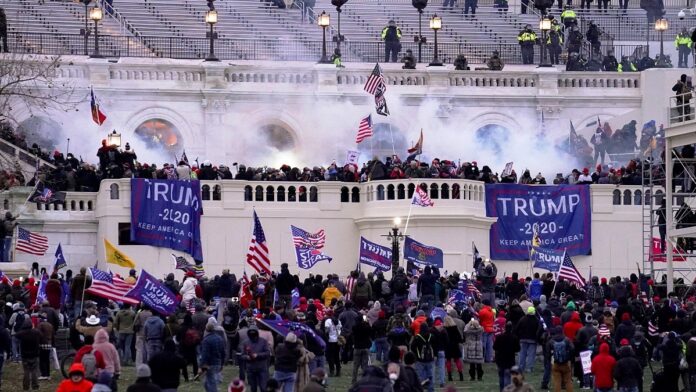 IN the year since supporters of outgoing U.S. President Donald Trump stormed the Capitol building in Washington, D.C last year on January 6, many, including the FBI director, have classified the events as an act of domestic terror.

Now, a new two-country study from the non-profit Angus Reid Institute finds a majority of Canadians and Americans alike agree with that designation – though political divisions on both sides of the border are evident.

While one-quarter (24%) of those who voted for Trump in 2020 agree that the storming of the Capitol was domestic terrorism, still seven-in-ten (68%) disagree. This represents a significant difference from the near unanimity voiced by President Joe Biden’s voters (92%) in believing that term is appropriate.

In Canada, 35 per cent of past Conservative voters disagree with calling the events an act of domestic terrorism, while a handful of NDP (5%) and Liberal (5%) voters take this view.

Investigations into the attack continue. More than 700 people have been charged with crimes for their actions, and Trump allies continue to combat subpoenas for information from the committee in charge. Canadians and Americans likely see this as another example of flailing democracy in the U.S. Indeed, when asked about American democracy, three-in-five in each country say that the country used to be a good example for other countries to follow but is no longer. Still, one-in-five Americans (22%) and one-in-ten Canadians (10%) feel American democracy sets an exemplary standard.

Canadians supportive of government response to Ukraine-Russia conflict, but many say more is needed

Biden stands by nominee for India envoy despite Senate stalemate