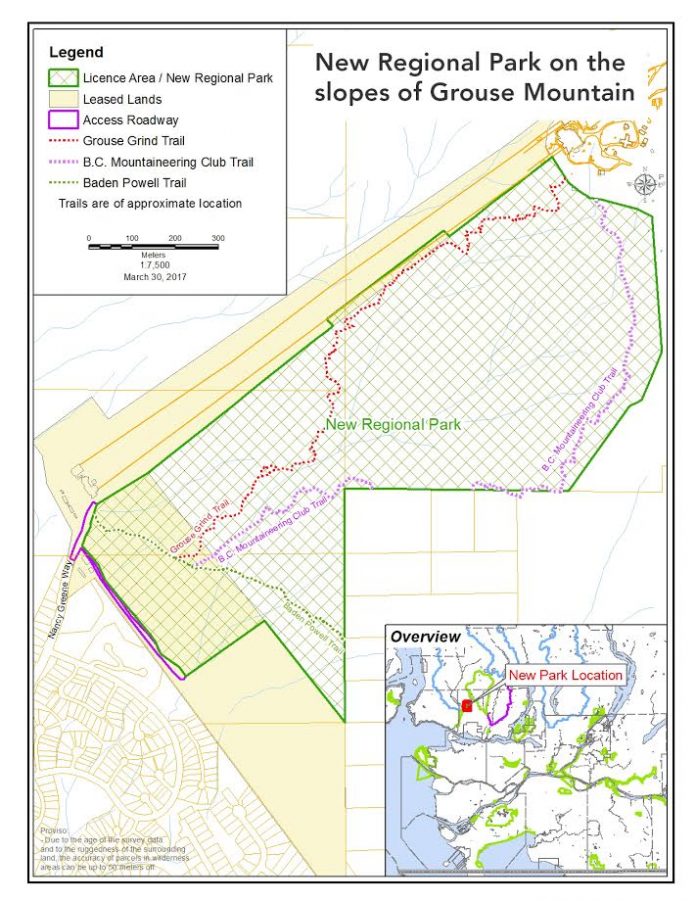 METRO Vancouver on Wednesday announced the creation of a new 75-hectare (185-acre) regional park on the slopes of Grouse Mountain that includes the popular Grouse Grind, BC Mountaineering Club (BCMC) and a portion of the Baden-Powell trails within its boundary.

Effective May 1, the new park will become the 24th regional park in Metro Vancouver’s portfolio. In addition to hosting popular hiking trails, this area of the North Shore contains mature forests and mountain streams that are home to a variety of wildlife including black bears, cougars, barred owls, black-tailed deer and northern red-legged frogs.

“The new regional park, on the slopes of Grouse Mountain, will protect a unique ecosystem for generations to come, while providing visitors with world-class outdoor recreation experiences,” said Metro Vancouver Board Chair Greg Moore. “This is a tremendous opportunity for environmental education and community stewardship that will help park visitors understand the value of the region’s natural environment and the vital need to protect it.”

The southern slope of Grouse Mountain, where the park will be located, was logged in the 1900s and trails were developed by hikers and climbers to access mountain peaks, notably the BCMC and Larsen trails. The Grouse Grind, a steep 2.9-kilometre trail up the face of Grouse Mountain, was added in the early 1980s as a climbers’ conditioning trail and it has gained worldwide popularity over the years as a challenging and scenic hike, with several hundred thousand hikers tackling its steep ascent each year.

“We are thrilled to have the iconic Grouse Grind officially within the fold of the Metro Vancouver Regional Parks system, which is celebrating its 50th anniversary this year,” said Heather Deal, Chair of the Metro Vancouver Parks Committee. “We will continue annual maintenance of this renowned trail, also known as Mother Nature’s Stairmaster, and will assess the entire park to see what trail additions or improvements can be made in the future.”

Future park planning will be in line with the rest of the regional park system, and the official park opening is expected to coincide with the start of the hiking season on the North Shore mountains and the annual opening of the Grouse Grind in May or early June.

Hikers are reminded that the Grouse Grind remains under a seasonal closure and will be opened to the public when annual spring maintenance works are complete and conditions are safe.

Information about the Regional Parks 50th Anniversary can be found at: