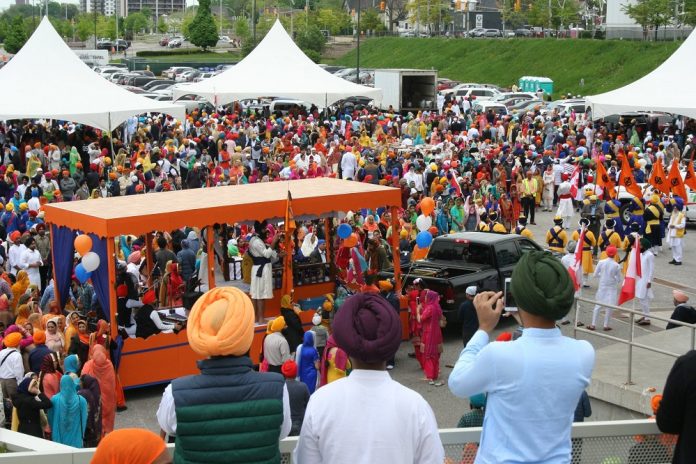 For the first time, Windsor parade was opened by Caldwell First Nation representing indigenous participation to welcome the event on its territory

WINDSOR, Ontario: The Windsor Sikh community, joined by Sikhs from across Ontario and the United States along with members and leaders of all different faith communities, gathered at Windsor Downtown Festival Plaza on Sunday, May 20. It was a stunning day for the community to learn and celebrate the beautiful Sikh Khalsa Day – Vaisakhi – with more than 10,000 people in attendance.

“Vaisakhi, traditionally a harvest festival, marks the very special significant day when the 10th Guru of the Sikhs, Guru Gobind Singh ji, formalized the faith as Khalsa community, gave a distinct identity with five articles of faith which are the Kesh (unshorn hair) covered by a turban (keski), Kangha (wooden comb), Kara (iron bracelet), Kirpan, and Kachhera (cotton undergarment). The founding of the Khalsa was a pivotal event in Sikh history which gave the Sikh faith its final form and when the Guru transferred social and political power to the Sikh people. Nagar Kirtans are the traditional method of celebrating Vaisakhi. During a Nagar Kirtan the community jointly sing hymns from Sikh scriptures while walking together through the city. The Nagar Kirtan is led by the Panj Piare, five Sikhs who symbolically represent the authority bestowed on the entire Sikh Nation, as well as the Guru Granth Sahib, which is not just the Sikh scripture but the embodiment of the spiritual authority of the Guru. Guru Granth Sahib is the centre of all Sikh devotional practice and is treated with the utmost respect, as we consider this scripture to be the embodiment of Divinity,” explained Harjinder Singh Kandola, President of Sikh Cultural Society of Metropolitan Windsor, that organized this event with the support of various Sikh organizations.

Mandeep Singh Gill and Harinder Singh Dhillon, two of the event organizers, said everyone is welcome and invited here to come out to celebrate and learn more about the Sikh faith and heritage.

“Vaisakhi Nagar Kirtan is a time when Sikhs across the world reflect on and reaffirm their commitment to the values of equality, social justice, selflessness and community service,” said Gian Singh Chandan, another organizer.

Representatives of various faith organizations, indigenous people, and community leaders including the Mayor, MPs, MPPs, and City Councilors walked in the parade with the Sikhs and donned orange / yellow scarves or turbans to cover their heads. “We are getting into the spirit of things on Khalsa Day today. A colourful parade and great crowd out at Riverfront Festival Plaza”, remarked NDP MPP Percy Hatfield who joined the event with his other colleagues MP Tracey Ramsay and Essex NDP candidate Taras Natyshak. “It is spectacular morning at Windsor Essex Vaisakhi Nagar Kirtan Khalsa Day Parade with our vibrant Sikh Community,” said Ramsey about the event.

“Yellow and orange are the traditional colours of Vaisakhi. They represent the spirit of rebirth and sacrifice of the Punj Pyare but are also a colour of joy and celebration,” noted Jagjit Singh Varaich, Secretary of SCSMW.

The event included attractive colourful floats, exhibition of Sikh values, history, lifestyle, music, display of Sikh martial arts Gatka, a Canadian Army band, and beautiful words shared by the community. Free food, drinks and other refreshments were served from stationary points as well as from other floats and vehicles displaying the great Sikh tradition of Langar – Free Community Kitchen.

Gian Singh Chandan said, “Giving back, sharing and celebration go hand in hand for the Sikh community in Windsor”.

The event was also attended by Khalsa Aid, an international Sikh organization committed to selfless seva (service) through humanitarian aid work. Khalsa Aid Canada spokesperson Amninder Singh Chahal said, “Khalsa Day celebrations in Windsor at Festival Plaza is a great opportunity to celebrate and raise funds for the disaster relief efforts. Much of the donations come from every day people to provide clean water and food in disaster areas, in places like Haiti, Iraq and Syria.”

“We draw inspiration from Guru Gobind Singh ji who taught us to “recognize the entire human race as one”, Khalsa Aid volunteers are deployed immediately wherever in the world humanitarian aid is needed,” remarked another volunteer.

The event began with a Sikh prayer (Ardas) by preacher Bhai Shamsher Singh and a land acknowledgement from the Caldwell First Nations Chief Mary Duckworth. The Sikh community acknowledged that they were on the traditional territory of the Three Fires Confederacy of First Nations, comprised of the Ojibwa (oh-jib-way), the Odawa (oh-DOW-ah), and the Potawatomi (pot-a-wah-tow-mee).

“For the first time, Windsor parade was opened by the Caldwell First Nation representing indigenous participation to welcome the event on its territory. Specifically, this is the home of Caldwell First Nation, and part of the house of Walpole Island First Nation. They have cared for this land for many generations and we thank them for allowing us to be here today. We’d also like acknowledge all of the moccasins that have traveled across these lands in the past. This marks an important step in building relationships between the two communities “, said Japman Kaur, a youth activist from Windsor Sikh Youth Council.