Home Crime ‘Policing is now looked upon as a successful and honorable profession in...
Facebook
Twitter
WhatsApp
Email 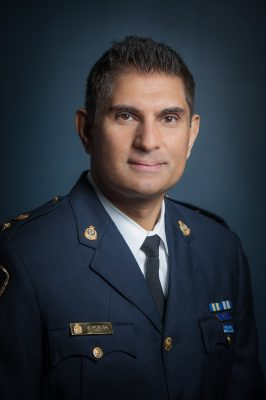 STEVE Rai, Deputy Chief Constable of the Vancouver Police Department told The VOICE in an interview this week that there are over 60 South Asian police members in the VPD, working in a variety of assignments.

He added: “Over the past decade, the South Asian demographic has continued to increase in our department.  It has become a career that is looked upon as a successful and honorable profession in the South Asian community.”

Rai, who said that he’s exceptionally proud of his South Asian culture, has been an outstanding role model in particular for South Asian youths. He’s the first South Asian to serve as Deputy Chief.

Here is our interview:

VOICE: What all changes have taken place recently in recruitment policy to attract more diversity – racial or gender or other?

RAI: The Vancouver Police Department is committed to a police force that is representative of the diverse community it serves.  The direction on recruiting has remained unchanged over the years; we are still seeking the best candidates to meet the challenges of policing in the 21st Century.  In doing so, we have recognized the importance of not only having a workforce that is rich with diversity of experiences but diversity in ethnicity. There has been a greater emphasis on efforts to attract more applicants from the under-representative groups such as women and the ethnic community.

A second sergeant was added to the Recruiting Unit in late 2016, to enhance and revitalize our outreach efforts.  The VPD attends an average of nine outreach events every month, in addition to regularly scheduled recruiting information sessions at the Justice Institute of BC (http://vancouver.ca/police/recruiting/police-officers/information-sessions.html).  Many of these outreach events are tailored to ethnically diverse communities, to highlight and encourage a career in policing.  As a result of the positive feedback and interest, additional events have been added for 2017.

Additionally, the Recruiting Unit has teamed up with the VPD Public Affairs section to launch a large scale advertising campaign, comprised of ten rotating images of women and ethnically diverse individuals from a variety of professions to attract candidates across all cultures and ethnicities.  The campaign was launched March 8 with posters displayed at SkyTrain stations throughout the Lower Mainland.

Detective Tajinder “Terry” Parmar is one of our lead police officers doing community outreach work; Constable Mike Bal is another well-respected VPD member. Both officers  mentor thousands of young people, Mike and Terry are  well-known on social media and both work tirelessly as VPD officers to represent our organization at many public events such as Vancouver’s Vaisakhi Parade, MESH sports programs, including a great Vancouver soccer and sports program they manage. Terry and Mike are great role models to hundreds of local kids from many schools; collectively, they’ve positively influenced thousands of young lives and helped develop   contributing citizens, not to mention future police officers.

VOICE: How does this diversity make Vancouver Police a more effective force?

RAI: The ability to better understand the culture that the police officer is dealing with is a significant benefit, both to the investigating officer as well as the public.  Obvious language barriers aside, in many cases police officers are able develop and foster a sense of trust by simply being a member of the same ethnic group.  Additionally, having representatives of various ethnicities within the policing ranks will improve relationships because they have direct representation; and may be culturally sensitive to issues confronting their respective communities.

VOICE:  How many South Asians are there in VPD now? What has been the trend over the past decade?

RAI: Currently we have over 60 South Asian Police members in the VPD, working in a variety of assignments, including: Police officer and special municipal constable positions. Over the past decade, the South Asian demographic has continued to increase in our department.  It has become a career that is looked upon as a successful and honorable profession in the South Asian community.

VOICE: What advice do you have for South Asian youth regarding joining the police force?

RAI: * Recognize that decisions you make as a young person may have implications later in life

* Volunteerism is highly valued, make an effort to be involved in your community

* Maintain an active lifestyle and, if possible, engage in team sports

* Don’t get discouraged if some situations don’t go your way; nothing great was ever achieved without disappointment or setbacks

* Don’t concede to peer pressure, be your own person

VOICE: Could you tell us something about your own career in VPD as you are the first South Asian officer to hold the post of a Deputy Chief?

RAI: I am exceptionally proud of my South Asian culture. I think our community continues to contribute so much to British Columbia, the City of Vancouver and to the VPD.  I think there are many young South Asian men and women who would make excellent police officers; all they need is some encouragement.  In my 27 years of policing, I can tell you I’ve never regretted a moment of it; I continue to find it to be a rewarding and challenging career – I know I made the right choice.  It has given me an opportunity to help those in need and assist the vulnerable.  I enjoy working with people of all cultures and faiths and I feel that my parents instilled in me the importance of treating all people with respect.

VOICE: What changes do you expect in the force in the near future?

RAI: The VPD is hiring for 85 regular member positions for 2017 in addition to 24 Traffic Authority members and 24 Special Municipal Constable positions.  We anticipate that with the increased outreach efforts we will continue to see an increase in both applications for the various positions within the VPD as well as greater ethnic diversity in all levels of the VPD.

Please visit our website at joinvpd.ca or contact the VPD recruiting unit at Recruiting.vpd@vpd.ca for further details.

DEPUTY Chief Constable Rai has been with the Vancouver Police Department since 1990. He was born in Punjab, India, and raised in Vancouver, where he graduated from Kitsilano Secondary School.

Prior to joining the Department, he was a Canadian Forces Reserve member and attended the University of British Columbia, where he completed a bachelor’s degree in Asian studies. He also obtained a master of arts in criminal justice from the University of the Fraser Valley.

Rai started his career by garnering extensive operational experience, including eight years as a patrol constable in District Three, where his patrol duties encompassed field training and mentoring new police officers. He also drew on his cultural background to work extensively, at the street level, with the District’s Indo-Canadian community.

Rai was promoted to the rank of sergeant in 2003 and returned to District Three as an operational supervisor. In 2004, he was transferred to the position of sergeant-in-charge of the Vancouver Police Department’s Recruiting Unit. During this assignment, he led a highly motivated team of investigators in fulfilling the Department’s mandate in hiring a large number of regular force police officers, jail guards and traffic authority members. Rai’s team was successful in attracting many new exempt police officer applicants, while successfully hiring greater Aboriginal, ethnic, and female recruits, through community outreach and the mentoring of young future officers.

Upon the completion of his tenure in the Recruiting Unit, Rai was re-deployed as an operational sergeant in charge of a District Two patrol team. He was promoted to the position of Inspector in the Human Resources Section following this assignment, and then returned to District Three in February 2012. Rai was promoted to Superintendent, Personnel Services, in July 2014, and Deputy Chief Constable in June 2015.

Rai is qualified as a Bronze, Silver, and Gold Public Order Commander, and has been involved in a number of high profile and protracted public protests and demonstrations. He was the incident commander for many public events, including Occupy Vancouver, 2010 Olympics, and 2011 Stanley Cup riot.

In 2006, he was the only Canadian police applicant to be selected for the US State Department’s International Leadership Development Program that brought together police leaders from throughout the world.