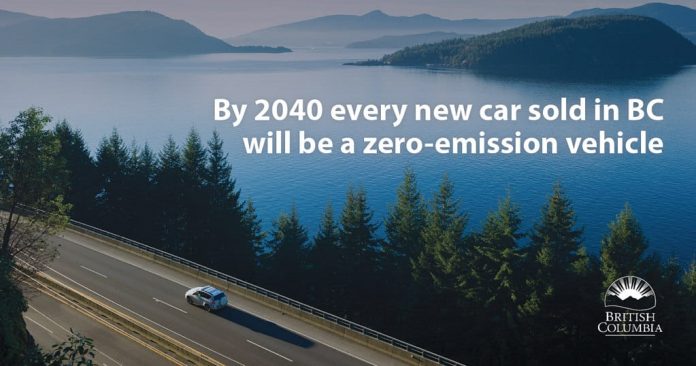 IN a move aimed at removing a major source of air pollution and climate change, the provincial government has put British Columbia on a path to require the sale of all new light-duty cars and trucks to be zero-emission vehicles (ZEVs) by the year 2040.

Premier John Horgan on Tuesday announced the government, in partnership with the B.C. Green caucus, will introduce legislation next spring to phase in targets for the sale of zero-emission vehicles (ZEVs). This legislation will set targets of 10% ZEV sales by 2025, 30% by 2030, and 100% by 2040, while government will take additional steps to make ZEVs more affordable.

“There’s nothing more important than taking care of the place we call home,” said Horgan. “As a province, we need to work together to put B.C. on a path that powers our future with clean, renewable energy and reduces air pollution.”

He outlined a three-point plan to kick-start and fuel the rollout of the ZEV standard:

1. Expanding the size of the province’s electric vehicle direct-current fast-charger (DCFC) network to 151 sites, with 71 already completed or underway and, leveraging federal and private-sector dollars, another 80 in the works.

2. Increasing the provincial incentive program, administered by the New Car Dealers Association of BC, by $20 million this year to encourage more British Columbians to buy clean energy cars now. This will bring the incentive program up to $57 million in total.

3. Reviewing the incentive program with an eye to expanding it over time, so buying a ZEV becomes a more affordable option for middle- and lower-income British Columbians.

“If we want British Columbians to be part of the solution for reducing air pollution, we need to make clean energy vehicles more affordable, available and convenient,” said Horgan, who added that this initiative is the first major policy commitment of the government’s upcoming strategy to meet B.C.’s legislated climate goals.

“Everywhere I go, I hear from British Columbians who are excited to embrace electric vehicles,” said Andrew Weaver, Leader of the B.C. Green caucus. “As an EV owner myself, I can attest to how good it feels to save fuel and repair costs, while doing my part to reduce emissions. The B.C. ZEV mandate is an exciting development that will support British Columbians as we make the shift to the low-carbon economy.”

British Columbia already has one of the largest charging and fuelling infrastructure networks – electric and hydrogen fuelling – in Canada and, with 12,000 clean energy vehicles registered, the highest adoption rates of electric vehicles in the country.

George Heyman, Minister of Environment and Climate Change Strategy, noted: “By embracing the ZEV standard, we’re joining other jurisdictions like Quebec, 14 U.S. states and many others worldwide.”