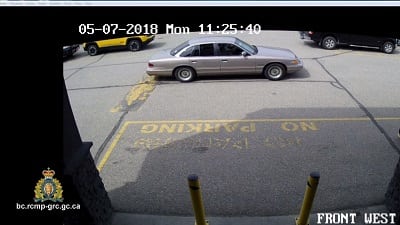 UPDATE: Police announced on Thursday that the Ford Crown Victoria reported in connection to the May 7 shooting in Vernon has now been recovered.

The victim of the shooting is a 24-year-old Vernon male who remains in hospital in serious condition.

AFTER preliminary investigations into what appeared to be two separate incidents in the Okanagan earlier this week, RCMP said on Wednesday they have uncovered a possible link between a shooting in Vernon and a carjacking in Penticton on the same day.

On May 7, the Vernon North Okanagan RCMP issued a news release, seeking witnesses and information for a shooting that occurred at noon in the 2700-block of 43 Avenue, Vernon.

The alleged shooter, described as white, 5’9, with blonde hair, was seen leaving the area in a 1996 grey, Ford Crown Victoria with a sticker in the lower passenger side rear window. This same vehicle was last seen in West Kelowna at approximately 1:25 p.m.

At 8:35 p.m. on May 7, Penticton RCMP were called to a motel in the 800-block of Westminster Avenue for a report of a man with a gun. The man was seen in possession of a high-visibility vest and matched the description of the suspect in the Vernon shooting. The man fled prior to police attendance.

A short while later, at 8:46 p.m., Penticton RCMP received a report of a carjacking in the 100-block of Maple Street. The victim, driving a bluish-grey Pontiac Vibe, reported that a male, matching the description of both previous incidents asked for a ride to the hospital to see a sick family member. Once inside the car, the male assaulted the victim. The victim was forced from the vehicle in the 900-block of Main Street, Penticton. The victim sustained serious but non-life threatening injuries.

At 8:35 a.m. on May 8, Penticton RCMP were notified that the victim’s stolen vehicle was mobile and nearing the Departure Bay Ferry Terminal in Nanaimo. Assistance from Nanaimo RCMP was sought to arrest the driver as the vehicle left the ferry.

Vernon North Okanagan and Penticton RCMP are now seeking the public’s assistance in locating the 1996 grey, Ford Crown Victoria bearing BC Licence plate DR258M and identifying any witnesses to the incidents.

Investigators are actively working to either confirm or eliminate information in order to conclusively determine if the various incidents are connected, if they are connected to a single individual or if others are involved.

Superintendent Ray Carfantan, Assistant District Officer RCMP Southeast District, said: “While we wish to advance these investigations, we must be mindful of the nexus to the ongoing Nanaimo investigation by the Independent Investigation Office of British Columbia (IIO BC). We will continue to support the investigative needs of our units here in the Okanagan to enhance public safety, while respecting that the IIO BC leads the investigation on Vancouver Island.”