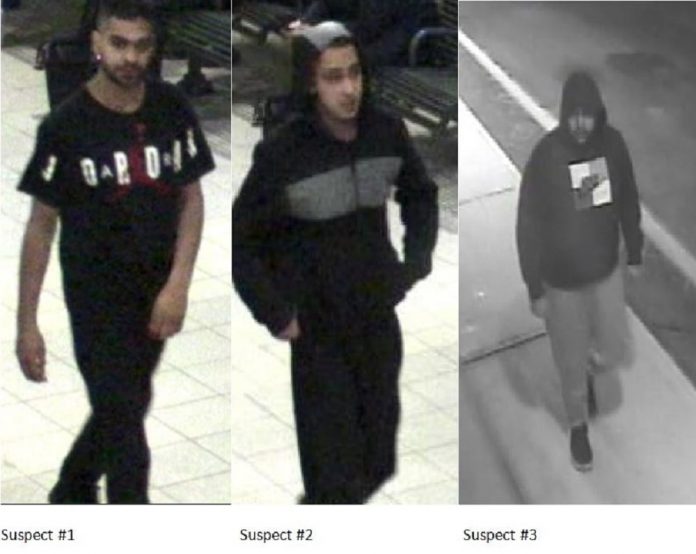 PEEL Regional Police’s investigators from the 12 Division Criminal Investigation Bureau are seeking the public’s assistance as they investigate a vicious assault on an autistic male in the City of Mississauga.

On Tuesday, March 13, at approximately 10:45 p.m., police received a call in regards to a violent assault that occurred in the Square One bus terminal located at 200 Rathburn Road West in Mississauga.

The 29-year-old victim from Mississauga was sitting on the stairs of the lower level of the bus terminal when he was approached by three male suspects. The three males surrounded the victim and continued to punch and kick the male multiple times. The suspects then fled the area.

The victim was taken to local hospital with serious but non-life-threatening injuries.

The suspects are described as:

Suspect #2: South Asian Male, light complexion, 5’10”, thin build, clean shaven. He is wearing a black jacket with a grey horizontal stripe across the chest and a grey vertical stripe along the hood, black track pants and black shoes.

Suspect #3: South Asian Male, medium complexion, 5’10”, medium build, unshaven. He is wearing a black hoodie with a Nike logo on the front and white Nike lettering along the sleeves, black track pants and black shoes.

To view the video with the suspects, click here.

Anyone with information regarding this incident is asked to contact investigators with the 12 Division Criminal Investigation Bureau at (905) 453-2121, ext. 1233. Information may also be left anonymously by calling Peel Crime Stoppers at 1-800-222-TIPS (8477), or by visiting www.peelcrimestoppers.ca or by sending a text message to CRIMES (274637) with the word ‘PEEL’ and then your tip.