IT has been called an epidemic, hampering the live-music community. When tickets to concerts, or big-name sports events go on sale, sophisticated ticket-purchasing software – or ‘bots’ – swiftly scoop up prime seats, with brokers reselling them back to fans at inflated prices on secondary markets. Outrage over this issue hit a fever pitch last summer when it was confirmed that two-thirds of tickets for the Tragically Hip’s final tour were sold before fans had access.

A new public opinion poll from the Angus Reid Institute finds Canadians sounding a sour note on this issue: three-quarters (76%) say it’s a “huge problem” that must be solved, and indeed, eight-in-ten say that they support legislation to ban the bots in Canada.

While the problem is apparently clear, the question of whose responsibility it is to provide a solution is not. Canadians are supportive of a number of measures, from an outright ban, to credit card confirmation at venues, to price capping in the resale market. But who should oversee these regulations? Half say it should be the government’s gig, while an equal number say this is a problem for the industry to solve on its own. 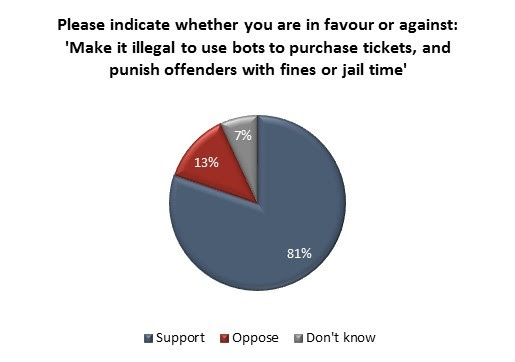