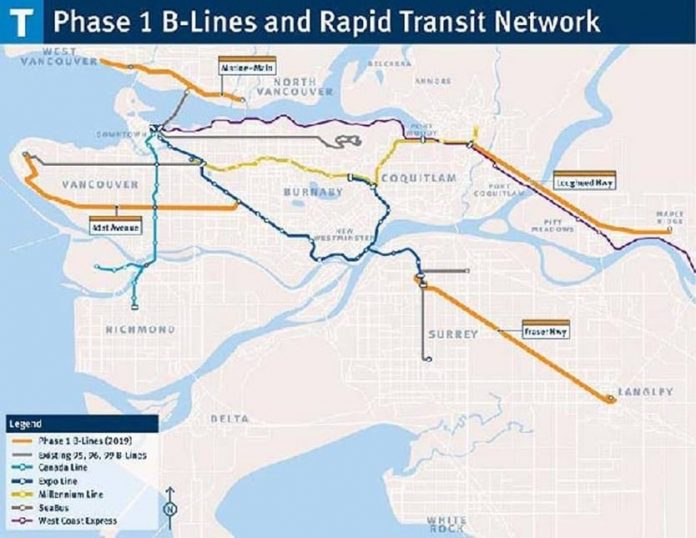 FASTER, more frequent bus service is coming to 12 Metro Vancouver communities as TransLink prepares for the roll-out of four new B-Line bus routes by the end of 2019. These improvements are part of delivering on the Mayors’ 10-Year Vision, and build upon region-wide transit expansion launched last year, TransLink announced on Tuesday.

The four new B-Line routes include:

These limited-stop, high frequency B-Line routes will provide, at minimum:

TransLink will soon be asking customers and residents in the areas near these future B-Lines for their input on things such as stop locations, local route adjustments and possible changes to street infrastructure to improve speed and reliability.

Fifty-eight articulated buses are being added to the fleet to support this critical component of the 10-Year Vision.

Right now, TransLink is working closely with municipal governments and community groups. The public will be invited to have their say on the new B-Lines and proposed service changes by taking the survey beginning April 3.

Greg Moore, Mayor of Port Coquitlam, said: “We’re excited to be getting this new service for transit users in our region. More frequent service allows our residents to be better served, which will boost transit use and help to reduce traffic congestion. I encourage everyone to give their input on the proposed changes.”

Selina Robinson, Minister of Municipal Affairs and Housing, added: “As a Metro Vancouver resident and a frequent transit user, I know firsthand the importance of increasing transportation options in the region. These additional bus services will help connect communities, get people home faster and make taking transit a more viable choice for more people. Our government will continue to support TransLink and the Mayors’ Council as they develop lasting and effective solutions to the region’s transportation needs through their Ten-Year Vision.”

Kevin Desmond, CEO of TransLink, noted: “This is a region that embraces transit and is hungry for more service. We’ve had great success with our existing three B-Line services, but we know there are more ways to make them faster and more frequent as we expand the program to new areas. We hope addition of four new B-Line routes with more amenities will make transit a realistic option for more people as we work to improve mobility and livability across Metro Vancouver.”