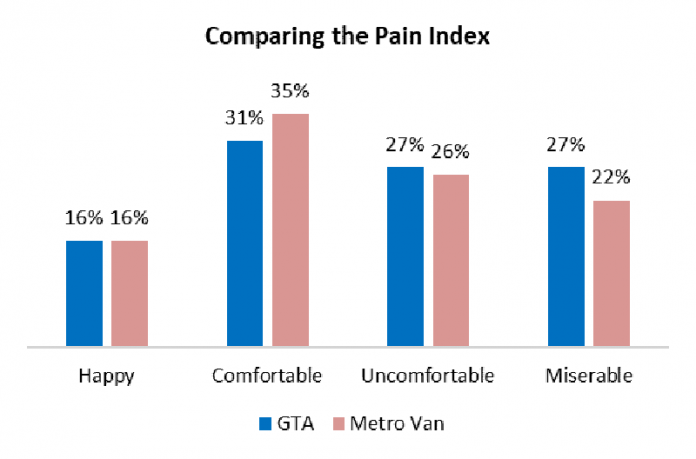 WHILE Metro Vancouver and the Greater Toronto Area are constantly atop the list of best cities, due to their diverse culture, public services, and entertainment, each now has the distinction of also being among the most overvalued housing markets.

What has emerged from skyrocketing housing prices are mirroring opinions between each region. A majority of residents say housing prices are hurting the region, and both are dissatisfied with how governments are handling the perceived crisis, according to an Angus Reid Institute survey.

* A majority of Metro Vancouver residents (62%) want to see prices in the region fall. They’re divided over the extent of the correction, however. One-in-four (26%) say prices should fall by 10 per cent or so, while 36 per cent would like to see a decline of closer to 30 per cent
* The top two causes of high housing prices – as perceived by Metro residents – are both forms of speculative purchasing. Six-in-ten (59%) say it is foreign buyer investments driving up costs, and 43 per cent say it is wealthy individuals in general
* Asked to name the top issues facing the region, most GTA residents (54%) list housing affordability as a top concern. In 2015, the number naming housing was 36 per cent
* The share of GTA respondents naming “low interest rates” as a major cause of high housing prices has fallen considerably since 2015 (from 44% to 30%), while the percentage placing the blame on foreign investors has risen (from 34% to 42%)