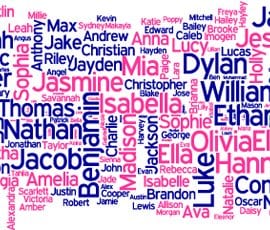 THE race for the top baby name for boys born in B.C. in 2017 is close. Benjamin is out in front so far, according to the Vital Statistics Agency’s preliminary statistics from January 1 to December 15, 2017.

Liam, Logan and Lucas are just as popular, with each name just a few places behind Benjamin in the current rankings. If Benjamin can keep its lead, 2017 will be the first year it is the top boys’ name. It also appears that Ethan and Oliver might not make it into the top five this year; possibly being replaced by Logan and James. Final statistics will not be available until later in 2018.

After topping the list of most popular baby names for girls born in B.C. in 2016, it is looking like Olivia is back on top this year with a good lead over Emma, which is in second place. For the past six years, Olivia and Emma have been the top two girls’ names. So far, the other names for girls in the top five remain Sophia, Charlotte and Ava.

To see the full list of the most popular baby names in B.C. for 2016, visit: https://www.health.gov.bc.ca/vs/babynames/baby2016.html

Only names whose frequency occurs five or more times are listed.

Liam, Olivia, Emma, Lucas, Oliver: Most popular names for babies in BC in 2018