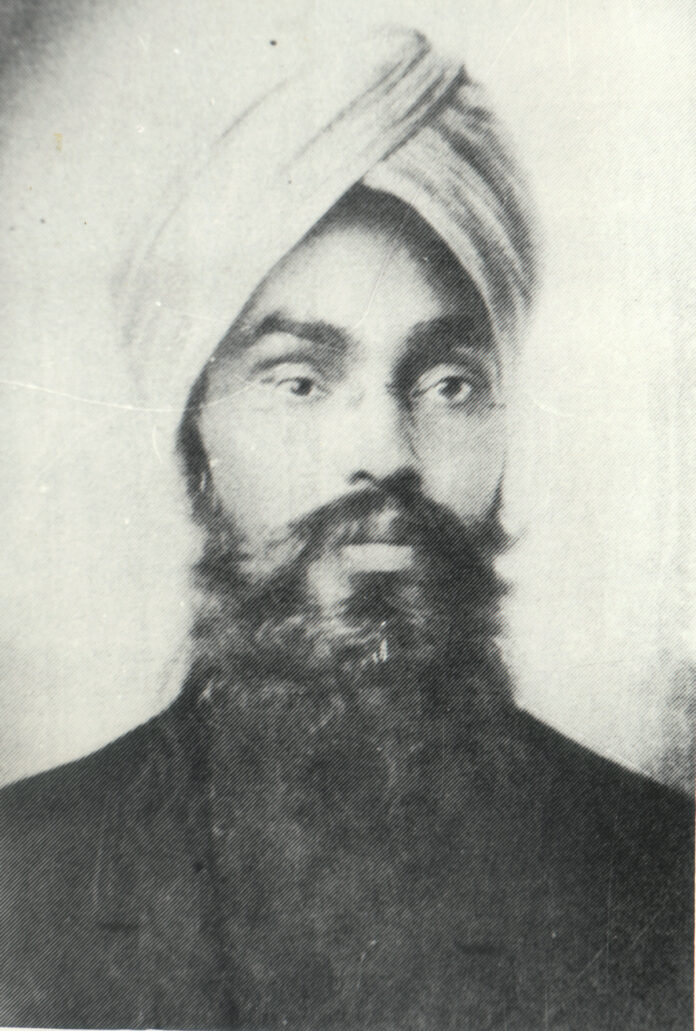 THE first Ambassador of Sikhism to the Western Hemisphere and founder of the first Sikh gurdwaras in Canada, the US and UK was a charismatic personality. His seven years sojourn in the West spanned from 1906 to 1913. Historians’ account of his contribution is sketchy and skewed. In his twenties, his academic achievements were stupendous. A man of his ability, intelligence, and erudition at a tender age could have risen to legendary eminence during his time. Very few would get opportunities that he had at the start of his career as administrative head, civil servant, and the educational leader of one of the best institutions of his time. Similarly, he had many prospects to excel in the West. But he was a class apart. He had no ambition for his personal success after he was touched profoundly by a seer who had considerable following in Punjab. His submission to his spiritual guide was complete and unselfish. His master gave him a mission that ranged from organizing the community to enshrining freedom, peace and spiritual poise in their lives. He transferred community wisdom to them that gave them the rare courage to face unique challenges in their social and political life. Sant Teja Singh’s name is associated with first Sikh gurdwaras in England, Canada and United States. Sant Attar Singh, a renowned saint of Mastuana, sent him to the western world with a message that there was nothing in the occult and ridhi sidhis.

Sant Teja Singh gave a different message to the world that nothing was higher than hard work, honest living and devotion to the creator. It is very important to know the multidimensional life of such a unique personality. The life of Sant Teja Singh Ji is a model of transformation of a highly educated, immaculate rationalist into a pious spiritually enlightened ideal man – a Perfect Gur Sikh (God-conscious person, Gurmukh)’.  He was blessed with this remarkable change by following the path of Prema Bhagti (losing oneself in the Eternal Divine by meditation on His Name) of Guru Nanak Dev Ji under the spiritual guidance of Sant Attar Singh Ji, Gur Sagar Sahib Mustuana in District Sangrur of Punjab, India. His life would continue to serve as beacon of light to all those interested in uplift and service of humanity without any distinction of caste, creed, race or color.

Sant Teja Singh with given name Niranjan Singh was born to mother Sada Kaur and father medical doctor Ralla Singh at Bolowali in Gujranwala District, Punjab, on May 14, 1877. The village is located in the vicinity of Eminabad (Saidpur Pathana), where Guru Nanak Dev Ji blessed a carpenter Bhai Lalo, shook the pride of the headman of the area Malik Bhago, and guided him to give up oppressing the poor so that the Divine Name finds a place in his heart; and where the Guru, seeing the world ablaze in the fire of jealousy, greed, and selfishness, performed austerities determined to pray for them and try somehow to find a cure for their ills.

– Did not practice Law, worked as Head Master of a High School, Bhera, 1901

– Assistant Superintendent, Northern India Salt Department, 1902-4; production of salt was a government-controlled enterprise and poor people were debarred from producing salt to make their both ends meet. This frustrated Sant Teja Singh and he thought of adopting the career of a teacher.

– Was the First Sikh student to study with turban and hair in tact. Finished five terms successfully and decided to complete the degree by taking sixth term later.

– Joined the Harvard University, USA and took the Master Degree in English Literature in 1911.

– Joined The University of California, Berkeley for Ph D in English; had to quit after some months to serve the Sikh and other Indian Communities in Canada in a struggle to bring their families from India.

– Sant Ji was invited to visit Vancouver and give lectures on Guru Nanak Dev Ji to the Sangat at Gurdwara Sahib, Vancouver. It was the first short trip of two weeks. 1908

After the settlement of Sikhs and other Indians in British Columbia in Canada, Sant Teja Singh Ji came to England to set up a Gurdwara and attend an International Congress in Berlin, Germany.

Propagation of Sikh Tenets in the West

– Organized Societies to manage these Gurdwaras

– Amrit Sanchar in B C Canada and Pacific Coast USA; first Amrit Sanchar and first Sikh marriage according to Sikh Maryada were performed at Vancouver

– First Sikh Procession was taken out in Victoria B C at the time of opening the Gurdwara Sahib. Sant Teja Singh delivered lectures on the Sikh Faith throughout the route of the procession. At the end there were as many white people in the procession as Sikhs and other Indian communities.