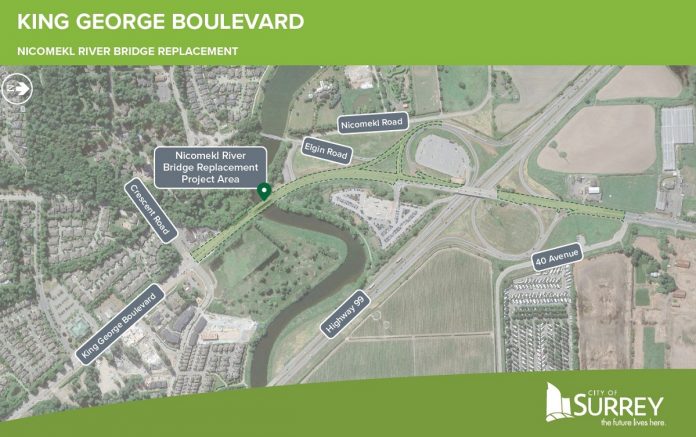 SURREY is partnering with the Ministry of Transportation and Infrastructure to replace the aging single-lane Bailey Bridge, and the two-lane timber trestle bridge, with a new four-lane Nicomekl River crossing on King George Boulevard.

“With this corridor seeing over 26,000 vehicles of traffic each day, the new Nicomekl River Bridge will build a stronger transportation network for Surrey residents to connect more efficiently to each other, and to the region as a whole,” said Surrey Mayor Doug McCallum. “The project will consist of two separate two-lane free-span structures that will be earthquake and flood resilient and will significantly increase the safety along this corridor. The new crossing benefits everyone, and I would like to thank the Province for their collaboration in making this long overdue project happen.”

Along with the new crossing, other road improvements are being made along King George Boulevard from the Park and Ride intersection to Crescent Road. Construction is anticipated to begin in winter 2021, with completion by winter 2022/2023.

The existing single-lane Bailey Bridge has been decommissioned and will be removed later this year to allow construction to proceed.  Delays are anticipated throughout construction and drivers are encouraged to consider alternate routes.

“A new Nicomekl River crossing will support better community connections in Surrey,” said Rob Fleming, Minister of Transportation and Infrastructure. “This wider crossing, built to modern standards, will be safer for pedestrians and cyclists, and alleviate the traffic bottleneck at the present three-lane crossing.”

The King George Boulevard corridor improvements from the Park and Ride intersection to Crescent Road will consist of the following:

These improvements will improve safety and allow for the efficient movement of people, goods and services to keep Surrey’s economy moving today, and into the future.

To learn more about the project, visit surrey.ca/nrbridge.