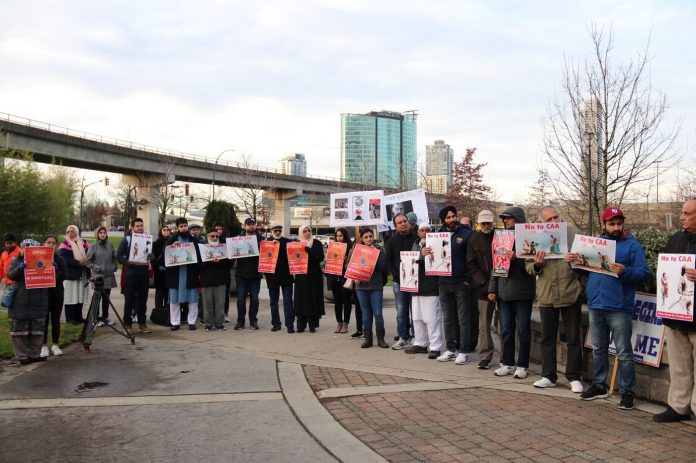 DOZENS of people came together on Sunday to denounce the controversial Citizenship Amendment Act (CAA) passed by the Bhartiya Janata Party (BJP) government in India at a rally organized in Surrey.

According to the protestors, the CAA is a divisive law that welcomes only non-Muslim refugees from the Muslim-dominated countries neighbouring India. Aimed at polarizing the Hindu majority against Muslims by excluding Muslim refugees from these countries, CAA has sparked angry protests all over India, especially from those who feel that it violates the Indian constitution, which is based on the principle of secularism that does not discriminate against anyone on the basis of religion.

More than 20 people have died during violent demonstrations while many opponents have been arrested.

The Surrey rally organized by Indians Abroad for Pluralist India (IAPI) began with a moment of silence for those who died during protests.

The participants raised slogans against the CAA and the BJP government. They held signs in support of secularism and diversity.

Among the speakers was anti-racism activist and educator Annie Ohana, who has consistently been raising her voice against human rights violations anywhere in the world. She had also spoken at an anti-CAA rally held outside the Indian Consulate General in Vancouver on Friday.