A suspect in the September 28 alleged hate crime incident against gays on SkyTrain was taken into custody on Wednesday night by Metro Vancouver Transit Police after they had released photos of the suspect and details of the incident to the media earlier in the day.
Transit Police said that at approximately 4:30 p.m. on Wednesday, November 7, as a result of media coverage on the incident, they received information that a possible suspect was at a location in Vancouver. Officers attended and located a man believed to be the suspect.
A 36-year-old Vancouver man who is known to police was taken into custody without incident. The suspect was interviewed by Transit Police and later released on a promise to appear. His first court appearance will be on January 16, 2019, at 2 p.m. in Vancouver Provincial Court.
Anyone who witnessed this incident, including the unidentified SkyTrain passenger who
intervened to assist one of the victims, is asked to contact Transit Police at 604-516-7419 or by text using code 87 77 77 (ref. file# 2018-17964).

ACCORDING to Transit Police, at approximately 2:30 p.m. on Friday, September 28, two young men boarded a SkyTrain at Waterfront SkyTrain Station. As they entered the train, another man kicked the foot of one of the young men and then left his seat to aggressively approach him. The victim crouched down in fear as the suspect raised his hand as if to hit him, while yelling obscenities and homophobic insults. 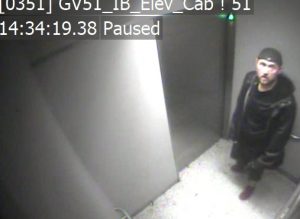 An unidentified passenger pulled the suspect away from the victim while the victim’s husband pushed the yellow emergency strip on the train. As the suspect again became aggressive toward the victim, his husband grabbed him and pulled him away. The suspect then hit the husband in the face, knocking off his glasses.

As the train pulled into Granville SkyTrain Station, the suspect attempted to kick one of the men in the stomach and then stepped off the train and spat in the other man’s face. The suspect continued to hurl profanities and homophobic remarks toward the couple as he walked away. SkyTrain staff assisted the two victims who were taken to hospital where they were treated for minor injuries and later released.

Transit Police investigators have liaised with the BC Hate Crimes Unit as the investigation has unfolded and victim assistance services have been offered.