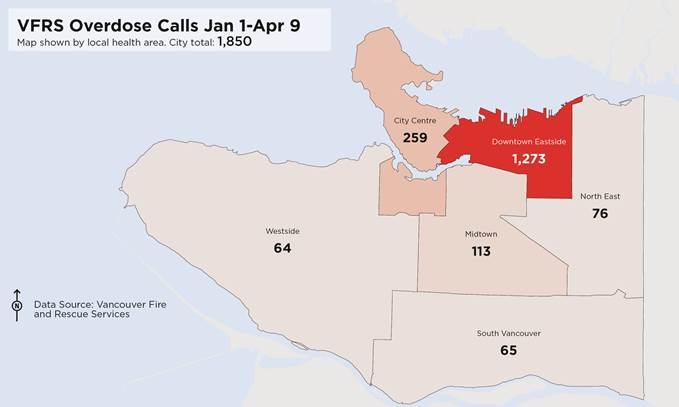 Province yet to invest federal funds to deal with crisis, says Vancouver Mayor

If rates of overdose deaths continue at this pace, Vancouver could see nearly 400 deaths in 2017, double the amount recorded in 2016 – the year in which the crisis was declared.

“Since the fentanyl crisis was declared a public health emergency one year ago this week, over 1000 people have died from drug overdoses across BC with Vancouver hit the hardest,” said Vancouver Mayor Gregor Robertson.

He added: “Earlier this year the federal government gave $10 million to the BC government to boost their response to the fentanyl overdose crisis, but the province has yet to invest those funds for treatment-on-demand, substitution therapy or clean prescription opioids. The status quo is a disaster – how many more hundreds of lives will be lost, and families impacted, before we see urgent action from the provincial and federal governments to deliver effective health solutions that save lives?”

Vancouver Fire and Rescue Services reported 134 overdose calls for the week of April 3, a 16.5% increase from the 115 calls responded to during the previous week. The majority of the calls were in the Downtown Eastside, however the number of cases outside the downtown area remained significant. VF&RS has now responded to 1,850 overdose calls from January 1 to April 9, 2017, more than double the number of calls responded to for the same time period in 2016.

Vancouver Police reported seven suspected overdose deaths across the city last week. Toxicology reports are not yet complete on these cases, and final overdose death numbers need to be confirmed by the BC Coroners Service.

In order to support work to reverse this trend, the City is advocating that senior levels of government take immediate steps to increase access to treatment on demand options. Injectable Opioid Assisted Therapy has been proven to work for those at most risk of overdose. Presently, the Crosstown clinic only has capacity to offer lifesaving treatment to 140 patients. However, City staff and local addictions experts estimate that there are at least 450 others that are in urgent need of this treatment option.

The City said that the federal government recently announced it would transfer $10 million to BC to fight the opioid crisis. These funds have not been allocated yet and City staff are suggesting that $8 million should be directed towards providing immediate injectable therapy and psycho-social supports for patients in Vancouver.

Additional investments should also be targeted towards other regions that are experiencing high rates of overdose deaths. These investments would save lives and reduce long-term healthcare costs through better patient outcomes.

Beyond this, senior levels of government must take upstream measures to prevent the negative impacts of substance use on individuals and their loved ones through drug policy reform, investment in national early care and learning, housing affordability, and a national strategy for poverty reduction.