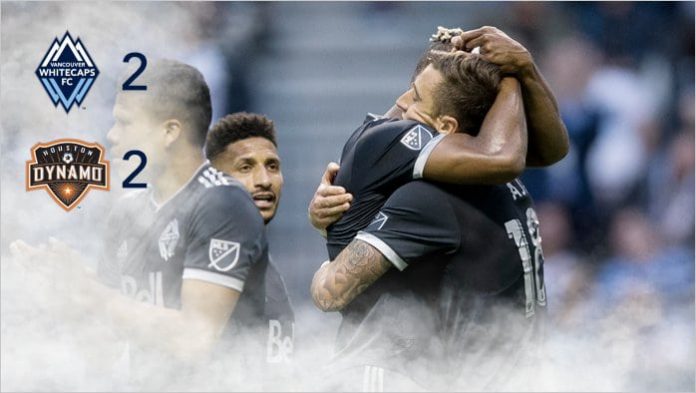 VANCOUVER, BC: Centre backs José Aja and Kendall Waston found the back of the net for Vancouver Whitecaps FC (4W-5L-2D) in an action-packed 2-2 draw with Houston Dynamo (3W-3L-3D) on Friday night at BC Place.

Waston scored a 94th-minute equalizer after Houston took a late 2-1 lead and added an assist on Aja’s first-half marker. Whitecaps FC midfielder Felipe, whose set piece delivery was sublime all evening, recorded assists on both tallies.

Whitecaps FC head coach Carl Robinson made three changes to his starting lineup for Friday’s match. Notably, goalkeeper Brian Rowe got the nod in place of the injured Stefan Marinovic, who suffered a left knee sprain in training on Thursday. It was Rowe’s official debut for Whitecaps FC.

Marcel de Jong also drew back into the XI at left back, while Kei Kamara made his first start since suffering an adductor strain on April 12. Kamara formed a partnership up top with Anthony Blondell as Robinson fielded a 4-4-2 formation for the second straight outing.

The ‘Caps looked the more likely side to score in the early going, with Blondell finding space in behind and Alphonso Davies causing problems with his darting runs through midfield. But it was Houston that struck first against the run of play in the 35th minute, when Tomás Martínez finished from the top of the box after receiving a short feed from Alberth Elis.

It would not take Vancouver long to find an equalizer.

In the 44th minute, Felipe alertly played a quick free kick to an unmarked Waston, who poked the ball around Mauro Manotas before sending in a cross to Aja. And the Uruguayan centre back, who turned 25 on Thursday, finished with a first-time volley at the near post to get Vancouver on the board.

Robinson’s men had Houston on their heels throughout the second half, forcing Dynamo keeper Joe Willis into a few big-time saves and causing a number of goal-mouth opportunities. But the visitors once again struck against the run of play, this time through a 90th-minute Manotas strike.

The ‘Caps kept coming though and would level the match for a second time in the fourth minute of stoppage time. The play once again started with a Felipe free kick. This time, the Brazilian played a straight ball to Kamara, who headed it back across the face of goal where Waston finished emphatically to score his first goal of the season and secure an important point for Vancouver.

Next up for Whitecaps FC is a midweek clash with San Jose Earthquakes on Wednesday night at BC Place (7:30 p.m. PT on TSN1/5 and TSN 1040 – tickets still available). The ‘Caps will then hit the road for a Saturday afternoon fixture against FC Dallas (1 p.m. PT on CTV, TSN, and TSN 1040).

MCMILLAN ‘CAPS CORNER KICK DONATIONS
For every ‘Caps corner kick at home, McMillan donates $100 to the United Way. An additional $500 is donated for every goal scored off a corner kick. This match McMillan Corners for Kids has donated $500 for a running total of $2,300.