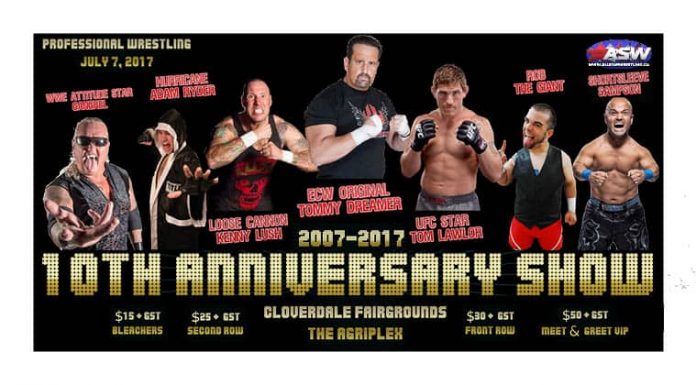 CLOVERDALE FAIRGROUNDS AT THE AGRIPLEX

This is it! The night you’ve been waiting all year for, All Star Wrestling’s 10th Anniversary show, and this time we are bringing it to you much bigger, right from The Agriplex at the Cloverdale Fairgrounds.  This family friendly, action packed show will leave you on the edge of your seat. So make sure you come on down July 7th for the show of the year as ASW presents their 10th Anniversary show.

The Innovator of Violence, Tommy Dreamer teams with Mr. India and Thunder from Jalandhar vs. Azeem the Dream and Christopher Ryseck, (Team USA) and the Fabulous Fabio

ECW/WWE star Tommy Dreamer has returned to All Star Wrestling and he’s taking on Team USA and the Fabulous Fabio with Mr. India and Thunder from Jalandhar. All three men have had run ins with Azeem the Dream at one time or another and now they’re teaming up in hopes of stopping Azeem and Team USA’s reign of terror.

Both Men have held the ASW Trans Canada Champion and now it’s time to battle it out. Gangrel makes his long awaited return to All Star Wrestling against Hurricane Adam Ryder. Ryder claims to be the best ASW Champion ever and Gangrel is ready to prove him wrong. One of these men will get to walk away with bragging rights when all is said and done.

UFC star Tom Lawlor is making his All Star Wrestling debut against the Loose Cannon Kenny Lush. Pitting Pro Wrestling against MMA, both men could be evenly matched, having crossed over on several occasions. Who will reign supreme in this match up that is for sure to be talked about for years to come?

Does everybody know what time it is? IT’S MIDGET TIME!! Short Sleeve Sampson is back to wow the crowds for this amazing show and this time he is taking on Rob the Giant in his ASW debut. Short Sleeve is a crowd favourite each and every time he steps foot inside an ASW ring. His matches will leave you on the edge of the seat and with a new opponent; we bet you won’t even be sitting for this incredible match.

for the ASW Cruiserweight Title

Two of these men, Nick Price and Matt Xstatic are no strangers to the TLC match. Will this give them an advantage or does Air Adonis and the Cruiserweight Champion, Kobra Kai have a fresh take on this? Either way, this match full of Tables, Ladders and Chairs, will leave the crowd screaming for more as all four men battle it out for the prestigious Cruiserweight belt hanging from the ceiling. Can Kobra Kai hold on to his title or will one of these men’s thirst for gold beat him to it?

The Twisted Sisterz Holidead and Thunder Rosa(Champions) vs. The Hall Sisters, Bambi & Liiza managed by their mom, Raven Lake.

Holidead and Thunder Rosa have both appeared in ASW at different times. When Thunder Rosa was here, she took Bambi Hall to her limits before the hometown favourite came out on top, winning the Girls Gone Wrestling Title. Now, it’s sisters against sisters in what should be an epic tag team match for the Sabotage tag team titles. The Hall Sisters are up to the challenge to show the Twisted Sisterz they have what it takes but the veteran team aren’t quite ready to let those belts go.

3 years ago, the sudden death of Johnny Canuck shook the wrestling world and now we honour him with the 1st annual Johnny Canuck Battle Royal. The Winner will receive a title shot against the ASW Trans Canada Heavyweight Champion at WrestleReunion VII July 21st.

The Entrants announced are:

Plus more entrants to be announced.

Meet and Greet VIP and front row are already sold out!!!!

All prices are plus GST

So get your tickets fast before they sell out and we will see you July 7th!