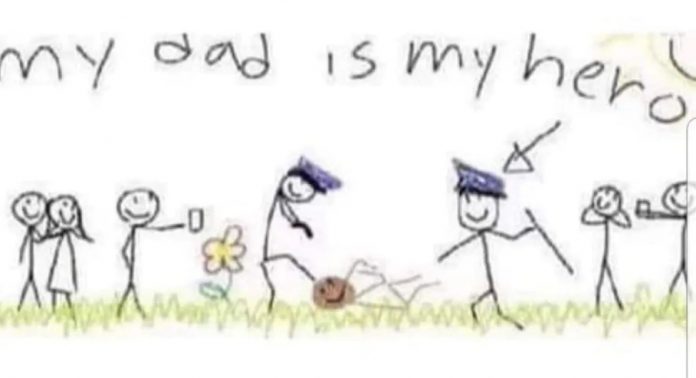 THE National Council of Canadian Muslims (NCCM) is calling for the Durham Regional Police Service (DRPS) to take action by committing to creating an anti-racism strategy in the aftermath of the Durham Regional Police Friends social media post.
The post shows two stick figures with white faces wearing police hats and standing over the stick figure of a man with a brown face, where one smiling officer is pointing a gun at the brown figure and pinning the individual down, while another smiling officer holds a stick and appears to be in the process of striking the individual on the ground.
“We certainly appreciate the heartfelt apology and condemnation from Chief Paul Martin. It means so much,” said Mustafa Farooq, Executive Director of NCCM, “However, there is much work to do. DRPS must take action by developing an anti-racism strategy within its force”.
Given a 2018 survey which submitted that complaints of workplace bullying and harassment are not dealt with effectively internally, it is more critical now than ever to launch a transparent community-informed anti-racism strategy that works to make sure that police officers are thinking critically about implicit bias, excessive force, and racism.
NCCM further demands that those who were involved in sharing this image should be investigated and disciplined as per the relevant policies to the greatest extent possible.

(CBC reported that “Martin sent a memo to the entire force labelling the image “hateful” and warned that anyone involved in sharing this kind of content will be “investigated and disciplined to the fullest extent possible.”” Martin told the CBC that the material was created in the U.S. years ago and the person who shared it is a retired member of the Durham Regional Police Service.)