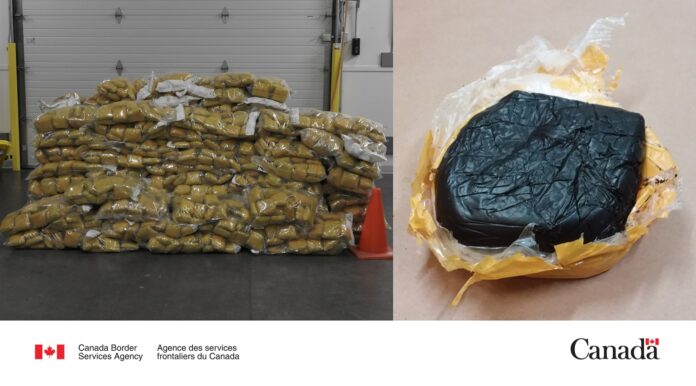 THE Canada Border Services Agency (CBSA) on Monday announced the result of a joint operation, involving the CBSA Pacific Region Intelligence Section (PRIS) and the­ RCMP, which led to a record amount of opium being seized.

In early February, PRIS partnered with the RCMP Federal Serious and Organized Crime (FSOC) section in an investigation into suspected smuggling in the marine mode. Subsequently, border services officers from the CBSA’s Metro Vancouver Marine Operations, in collaboration with PRIS and the RCMP FSOC, conducted an examination of two ocean containers.

The estimated value of the seizure is $10 million. This is one of the largest opium seizures for the CBSA on record.

In support of the follow up investigation, CBSA Operations and Intelligence personnel worked collaboratively to analyze and gather all information related to this shipment. The criminal investigation is ongoing by the RCMP FSOC section.

Yvette-Monique Gray, Director, Enforcement and Intelligence Operations Division, Pacific Region, CBSA, said: “This seizure demonstrates the remarkable partnership the CBSA and the RCMP have when it comes to preventing illicit drugs from entering Canada and ensuring the safety and security of Canadians every day. During these unprecedented times, it is imperative that the CBSA continues to work very closely with the RCMP and law enforcement agencies across Canada in monitoring and investigating cross-border smuggling of illicit drugs.”

* The CBSA’s Intelligence Section plays a key role in the identification of border-related risks and in protecting the safety and security of Canadians. Intelligence activities are conducted to identify individuals and entities that are of interest to the CBSA in connection to organized crime, drug smuggling, and other violations of the Customs Act and the Immigration and Refugee Protection Act.

* The CBSA and the RCMP work together to prevent illegal drug smuggling that endangers the safety of Canadian communities and generates profits for organized crime, and to ensure that perpetrators are investigated and prosecuted.

* If you have information about suspicious cross-border activity, contact the CBSA Border Watch toll-free line at 1-888-502-9060.

CBSA: Border measures remain in place for travellers entering or returning to Canada

Bakhshinderpal Singh Mann arrested in Brampton and extradited to U.S.