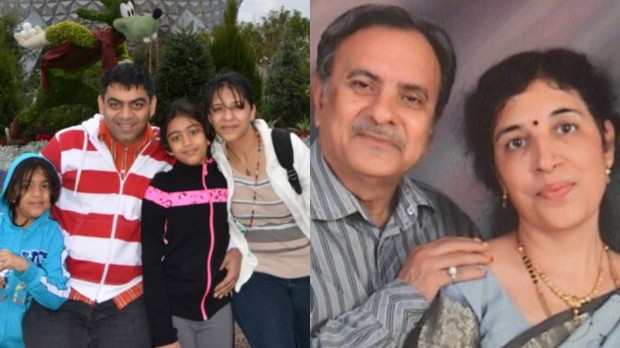 TWO Brampton (Ontario) school students, sisters Ashka and Anushka Dixit from Chinguacousy Secondary School and Centennial Senior Public School, respectively, along with their parents and grandparents were among the 157 people who died when their Ethiopian Airlines Boeing 737 MAX 8 jetliner crashed shortly after takeoff from Addis Ababa en route to Nairobi on Sunday.

The Peel District School Board tweeted: “This tragedy has brought great sadness to the students and staff at Centennial Sr. Public School and Chinguacousy Secondary School.”

According to reports, Ashka Dixit, 14, and Anushka Dixit, 13, were on a family vacation with their parents, 37-year-old Kosha Vaidya and 45-year-old Preit Dixit, and their grandparents, Pannagesh Vaidya and Hansini Vaidya.

Manant Vaidya told the media about their parents, sister, brother-in-law and nieces were on a trip to Kenya because his sister wanted to show her daughters where she was born. They also wanted to take in a safari. Her parents also agreed to accompany them.

PRIME Minister Justin Trudeau on Sunday said that he was deeply saddened by the plane crash near Addis Ababa, Ethiopia, that claimed the lives of 157 people, including 18 Canadian citizens.

Trudeau said: “On behalf of all Canadians, Sophie and I offer our heartfelt condolences to those who have lost family, friends, and loved ones as a result of this tragedy. While the causes of the crash continue to be investigated, the safety and security of all Canadians remains our primary concern.

“We are providing consular assistance, and working closely with authorities to gather further information. We join the international community in mourning the loss of so many lives, including those countries who have also lost citizens in this devastating crash. I am reaching out to President of Kenya Uhuru Kenyatta and Prime Minister of Ethiopia Abiy Ahmed to express my condolences for this tragic event.”

ETHIOPIAN Airlines Group CEO expressed his deep regrets at the fatal accident involved on ET 302 / March 10 on a scheduled flight from Addis Ababa to Nairobi.
The airlines in a statement said: “The group CEO who is at the accident scene right now regrets to confirm that there are no survivors.
“He expresses his profound sympathy and condolences to the families and loved ones of passengers and crew who lost their lives in this tragic accident.

THE University of Carleton said its community “is shocked and devastated to learn of the death of Prof. Pius Adesanmi (see photo), who was among the 18 Canadians killed in today’s crash of an Ethiopian Airlines jet at the Addis Ababa airport.”

“Pius was a towering figure in African and post-colonial scholarship and his sudden loss is a tragedy,” said Benoit-Antoine Bacon, President and Vice Chancellor. “Our thoughts and prayers are with his family and all those who knew and loved him, and with everyone who suffered loss in the tragic crash in Ethiopia.”