The installation ceremony for Payette will take place in the fall.

Payette is an astronaut, engineer, scientific broadcaster and corporate director.

From 1992 to 2013, Payette worked as an astronaut and flew two missions in space. She also served many years as CAPCOM (Capsule Communicator) at NASA’s Mission Control Center in Houston, Texas, and was chief astronaut for the Canadian Space Agency. 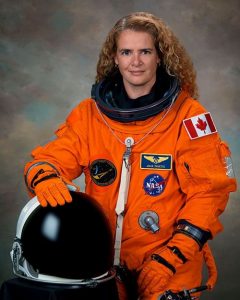 She is well respected for her work in developing policies to promote science and technology. From 2011 to 2013, she worked as a scholar at the Woodrow Wilson International Center for Scholars in Washington, D.C., and was appointed scientific authority for Quebec in the United States. Between July 2013 and October 2016, she served as CEO of the Montréal Science Centre.

Payette is active in multiple facets of the community. She has produced several scientific outreach short programs on Radio-Canada and is a member of McGill University’s Faculty of Engineering Advisory Board. She has served on the boards of the Montréal Science Centre foundation, Robotique FIRST Québec, Drug Free Kids Canada, and the Montreal Bach Festival. She has long served on the board of Own The Podium, a granting organization dedicated to high performance sport in Canada, and was recently appointed to the International Olympic Committee Women in Sports Commission. She has served as a Director of Développement Aéroport Saint-Hubert de Longueuil and of the National Bank of Canada.

Payette is a member of the Ordre des ingénieurs du Québec and a fellow of the International Academy of Astronautics. She obtained an International Baccalaureate from the United World College of the Atlantic in the United Kingdom, a Bachelor of Electrical Engineering from McGill University, and a Master’s in Computer Engineering from the University of Toronto. In addition, Payette can converse in six languages, holds a commercial pilot license and is an administratrice de sociétés certifiée (ASC is equivalent to the Institute of Corporate Directors, Director [ICD.D] designation).

Payette has received many distinctions and 27 honorary doctorates. She is a Knight of the Ordre national du Québec and an Officer of the Order of Canada.

“Ms. Payette’s accomplishments are well-known to Canadians of all ages. She was a pioneer during a long career in the Canadian Space Agency, most notably becoming one of the first women in the Canadian astronaut corps, and the first Canadian on board the International Space Station. As a scientist, a former Chief Astronaut for the CSA, and a leading advocate for Canadian ingenuity around the world, Ms. Payette will be well-suited to play a leadership role in Canada as the next governor-general.

“The role of governor-general is an important one in the functioning of Canada’s government. As the representative of the Crown in Canada, the governor-general’s role is to perform the Queen’s duties as laid out by the constitution on her behalf. It is a critical non-partisan role that can have a direct effect on the stability of Canada’s government. Ms. Payette will have the full confidence of our Conservative Caucus.

“Finally, our Caucus thanks Governor-General David Johnston as he prepares to depart the position this fall. For nearly seven years Mr. Johnston has carried out his duties with infallible dignity and with the utmost respect for the position. He has never been anything less than a full-throated advocate for Canada and Canadians, particularly on the world stage, and his has been an important voice in encouraging every citizen of this country to give a little more of themselves to their communities and each other. We thank as well Dr. Sharon Johnston and the Johnston family for sharing Mr. Johnston with Canadians these many years.

“On behalf of the Conservative Caucus, congratulations to Julie Payette, and we send our best wishes to her in her upcoming role as governor-general.”

PREMIER-DESIGNATE John Horgan said in a statement: “I’m pleased to congratulate Julie Payette on her appointment as the Canada’s 29th Governor General. Ms. Payette’s accomplishments as a Canadian astronaut, engineer, and in her years of public service, make her an exemplary choice to serve Canada in this important role.

“Ms. Payette is a role model to many British Columbians – she is a strong advocate for discovery and ingenuity, a beacon for women in STEM – Science, Technology, Engineering and Math, was one of the first women in the Canadian astronaut corps and the first Canadian on board the International Space Station.

“I wish her the best of luck as Governor General and believe she will serve her country with dedication and inclusion.

“I would also like to extend my sincere thanks to His Excellency David Johnston for his years of service to Canada.”