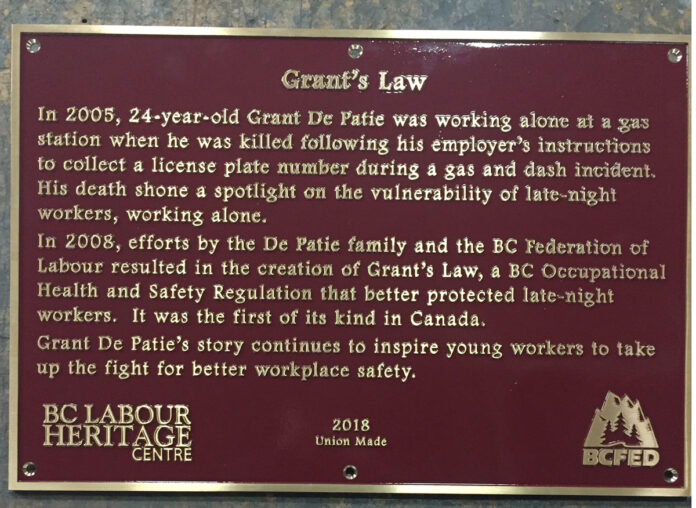 YOUNG workers will hold an overnight sit-in at a 24-hour convenience store in East Vancouver, pressing the provincial government to restore a law protecting convenience store and gas station employees who work alone at night, the BCFED announced on Saturday.

The event honours Grant De Patie, a 24-year-old gas station attendant who was working alone in March 2005 when he was run down and dragged by a car in a $12 gas-and-dash incident. De Patie’s family worked with the BCFED to press the provincial government for new rules to protect overnight workers.

In early 2008, the province introduced new safety rules, called Grant’s Law in his memory. But acceding to pressure from large corporate employers like Mac’s, the BC Liberal government stripped out two key protections in 2012, eliminating the need for safety barriers and loosening the requirement to have two staff working at night.

Since then, the BCFED Young Workers’ Committee has held annual overnight sit-ins outside convenience stores to campaign to restore Grant’s Law. The BCFED is calling on the Province to restore the stripped-out provisions and extend the period covered by the law by one hour, so it runs from 10 p.m. to 6 a.m.

BCFED Young Workers’ Committee co-chair shauna supeene said: “Every employee should be able to go home safe at the end of their shift. But many of the workers at this event know first-hand what it’s like to be working alone at night and facing the risk of violence. Restoring Grant’s Law is a simple, effective way to make work a lot safer for some of BC’s lowest-paid, most vulnerable workers.”

BCFED Young Workers’ Committee co-chair Rick Kumar said: “It’s gas station attendants and convenience store workers, but it’s also security guards like Harmandeep Kaur. She was just 24 — the same age as Grant De Patie — when she was killed on an overnight shift this year. We need to restore the protections in Grant’s Law, and do more to protect all overnight workers from violence.”

BCFED Secretary-Treasurer Sussanne Skidmore said: “Stripping out some of the most important protections in Grant’s Law to satisfy corporate lobbyists was a terrible mistake. Many overnight workers are among the lowest-paid in our province. And they shouldn’t have to face the threat of violence, alone and unprotected. They deserve urgent action now.”