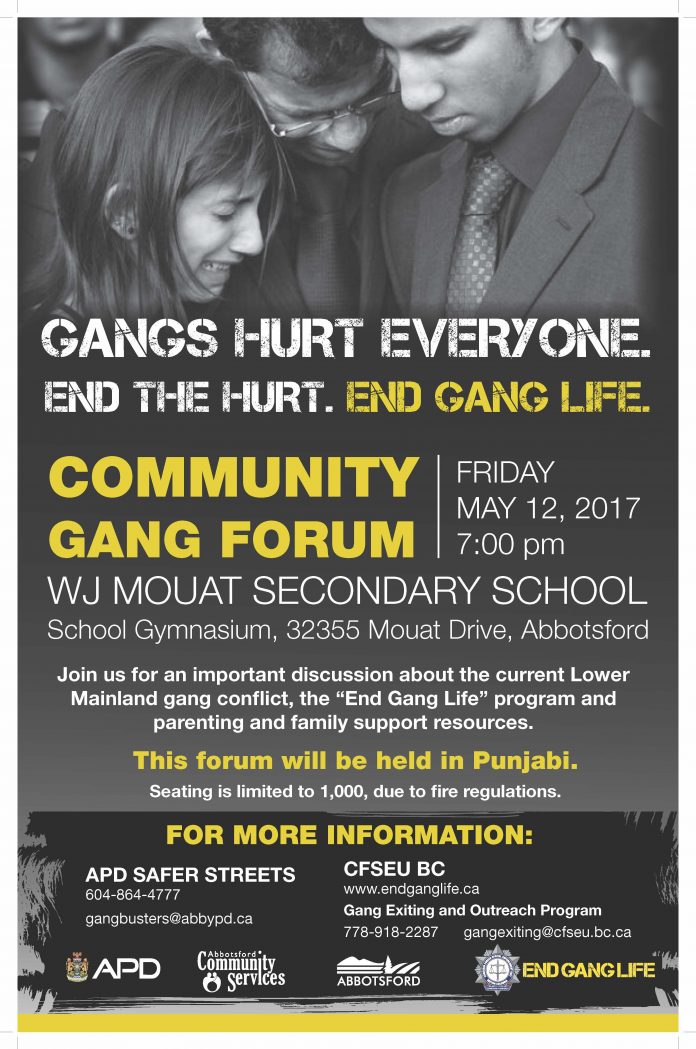 ABBOTSFORD Police Chief Bob Rich is reaching out to South Asian families once again in an attempt to end the ongoing violence between two groups of young South Asians.

The first step is a community gang forum only in Punjabi next week on Friday, May 12 at 7 p.m. at WJ Mouat Secondary School.

Rich told The VOICE that the first purpose of this forum is to communicate to families what’s going on because the dynamic in this particular conflict (Townline Hill Conflict) is different from others. There are lots of people selling drugs in Abbotsford, BUT “the violence in happening in the South Asian community and it is this conflict between these two groups.”

Rich added: “It’s involving these young people, many of whom are living at home; so we need to get to the families.”

The forum is being held only in Punjabi because “the people we need to get to at this point are those who are trying to figure out how to raise their kids in Canada, generally speaking, and are still most comfortable in Punjabi.”

The second part of the strategy is “going to be to tell them that we are willing to come to their home,” said Rich.

Abbotsford Police have two Punjabi-speaking members that have been meeting with South Asian families and telling them: “Look, your 16-year-old son is hanging out with the wrong people. You need to know what’s going on. You need to intervene in your son’s life.” Rich added: “And they are getting a great reception from families who just wouldn’t know that otherwise.”

Rich said: “So we want to say to families if you want us to come to your house and talk to your family about what’s going on with your son, you ask us to come, we will come. That kind of connection is something we want to make with people in Abbotsford. So that’s an important part of our message this time around.”

RICH told me: “We are actually really worried about how voracious the recruiting has been amongst our young people. So it feels like there’s another whole group of young men that could be sucked up into this if we don’t find a way to intervene. That’s what I am most afraid of.”

I asked Rich what is the main reason for the ongoing conflict between the two South Asian groups?

He explained that it started with these kids fighting with each other and getting pulled into the two groups. He said the conflict “has gone from throwing eggs to smashing windows to knives to guns.”

He added: “It’s kind of evolved and gotten worse – it’s escalated. And normally, a lot of gang violence is about fighting for turf to sell your product. But this one has become very personal and very retaliatory. And so the fighting is now not even logical around turf, it’s actually now ‘you killed my cousins or my mate and I am going to get back at you.’ So it’s going back and forth like that. So it’s very personal right now. And that really escalates it.”

Rich also pointed out an interesting fact: the main leaders of the two groups do not even live in Abbotsford.

He said: “What we’ve got are the young people, many of whom are still living at home, and the gangs will use the younger people to commit their acts of violence. … They can find other young people in the other gangs because they all know where everybody lives because they all grew up here. So you are getting shootings in driveways – they just wait for the kid to come home and that’s what happens.”

One South Asian dead, another injured in Abbotsford shooting

Abbotsford: Murder of Jaspreet Sidhu, 18, and attack on another 18-year-old South Asian part of same old feud between two groups