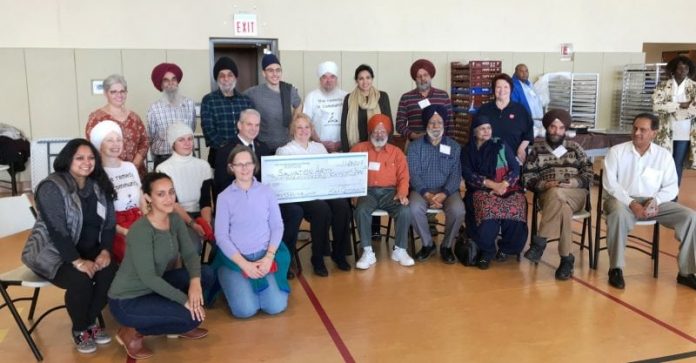 MEMBERS of the Sikh Religious Society of Chicago helped feed the needy on Thanksgiving Day at Salvation Army located at 825 North Christiana Avenue in Chicago, Illinois (U.S.)
The traditional Thanksgiving Day hot meal (turkey, mashed potatoes, beans, stuffing, bread rolls, apple and pumpkins pie) for over 500 people was prepared at the Salvation Army kitchen and served by a couple of dozen Sikh volunteers.
Major Nancy Powers of Salvation Army thanked the Sikhs for their service and contribution, and expressed her desire to bring more friends and family to visit the Sikh Gurdwara Sahib in Palatine.
“I really enjoy my visits to the Sikh Gurdwara and the love and hospitality shown towards me by the Sikh community. I proudly display in my office the plaque of honor presented to me by the Sikh Religious Society last time I was there,” said Powers.
People from all faith communities and all walks of life contribute money and volunteer time and labor for such events at Salvation Army. It gives a whole lot of personal satisfaction to be able to serve these meals to the needy so that they can also be part of these holiday celebrations.
The Chicagoland Sikh community has been doing this service at Salvation Army since 1992. Some Chicago Sikh families have been associated with this Sewa (service) since its inception to honor Guru Nanak, the founder of the Sikh faith, who started the tradition of Langar (free food). In the late fifteenth century, Guru Nanak once met a group of hungry Sadhus (saints) who had not eaten for many days. He spent all his 20 rupees capital money that his father had given him to start a new business to buy food to serve the hungry Sadhus.
Guru Granth Sahib Jee teaches us:
“Jithai Neech Samaalian, Tithai Nadar Teri Bakhsees.” (“God’s grace is especially present when the poor and the lowly are looked after.”)
“Once you start doing this sewa, you realize how blessed we are, that we have food on our tables at home. Many of these homeless or needy people bring their family and kids along with them who otherwise may not be able to afford a hot traditional meal and holiday celebration. People from many other faiths also joined in this volunteer service,” said Sarwan Singh Raju, the coordinator of the event.
It was a team work to serve the meals with great dignity to the guests.
Amardev Singh Badesha and Jasvir Singh Sodhi welcomed the guests who came for lunch. Thakar Singh Basati and Iqbal Singh Chopra handed out the pumpkin pies. Thakar Singh Basati and Kuldeep Singh who came to serve at Salvation Army had earlier participated in the McDonald’s Thanksgiving Day parade on State Street in the morning time coordinated by Punjabi Cultural Society of Chicago. PCS has been participating in this parade since 2005.
Other community members who came to serve were Siva Singh Khalsa, Shabad Kaur Khalsa and their son Amardev Singh along with Kanwarjeet Kaur Chopra, Lal Singh and Geeta Singh.
The Sikh Community collected funds and donated them to the Salvation Army. In addition to funds, Amardeep Singh Chawla, his wife Timki Kaur and their daughter Gurbani Kaur donated canned food for the pantry at the same location. Power especially thanked Amardeep Singh Chawla and his family for their extra efforts in donating the cans of food.
Many needy families receive food from the Salvation Army food pantry.
The Salvation Army also provides drug de-addiction services at its new beautiful location, and prepares the homeless clients for regular employment and ultimately home ownership.