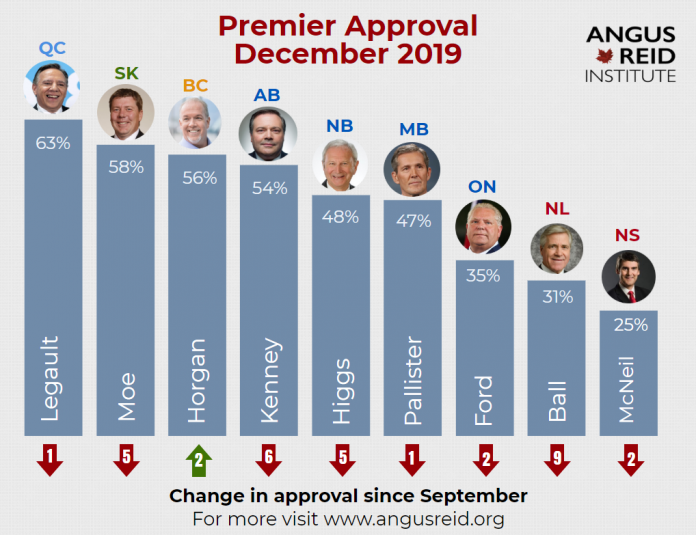 56 per cent of British Columbians approve of Horgan

Quebec and B.C.: Legault and Horgan maintain their altitude

In the days following the federal election, Quebec Premier François Legault offered some advice for Prime Minister Justin Trudeau if he hopes of fostering national unity: offer the provinces more autonomy. Whether or not that advice is helpful is debatable, as interprovincial trade tensions have also been divisive. That said, Legault’s push for more autonomy has been popular in his own province. His approval is the highest in the country at 63 per cent.

Premier John Horgan of British Columbia, alongside other premiers this quarter, called for an increase in healthcare transfers from the federal government. Horgan said he would like to see a commitment “meaningful to our budget so we can deliver the healthcare that people need”. Horgan also pressed Trudeau for assistance in determining why B.C. gasoline prices remain higher than the rest of the country. 56 per cent of British Columbians approve of Horgan this quarter.

Down quarter for Conservative leaders

Perhaps no premier has been as vocal over the past three months than Alberta Premier Jason Kenney. The United Conservative Party leader has outlined to Justin Trudeau his vision for a cooperative relationship, along with a list of demands for the federal government. Kenney seeks action on energy issues foremost, asking the government for a firm date on the TransMountain pipeline expansion completion, and a reversal of the government’s ban on tankers on the northern coast of British Columbia, among other requests. Kenney heads back to Alberta with majority approval (54%) but sees a six-point drop this quarter as some of his post-election honeymoon appears to have worn off.

After meeting Prime Minister Trudeau, Saskatchewan Premier Scott Moe left frustrated, saying he was expecting “more of the same” from this term of the Trudeau mandate. Moe was said to be asking for a one-year exemption from the provincial carbon tax and changes to the federal equalization program. Despite his disappointment in Ottawa, Moe garners the approval of 58 per cent of Saskatchewan residents, making him the second-most popular premier this quarter.

While most Conservative premiers enjoyed relatively high support from their constituents in 2019, that has not been the case for Ontario’s Doug Ford. The premier was, in essence, hidden from public view during the federal election to avoid dissuading voters from choosing the federal branch of the Conservative Party, and appears to be carrying low approval into the coming year. At the end of 2019, one-third (35%) of Ontario residents approve of Ford.

New Brunswick Premier Blaine Higgs shifted gears after the federal election. Higgs’ Conservative government had been part of a court challenge opposing the federal carbon tax, but after two-thirds of New Brunswick residents endorsed a federal party that supported such a tax, leadership in the province decided to create its own provincial plan. Ottawa approved the plan in early December, and Higgs continues to enjoy relatively high approval from residents this quarter at 48 per cent.

Approval of Manitoba Premier Brian Pallister is unchanged this quarter. Pallister’s government ruffled feathers in Quebec in late-November after running ads suggesting those offended by the Quebec government’s Bill-21, which bans religious symbols in the workplace, should move to Manitoba. While many in Quebec are likely viewing Pallister negatively, 47 per cent of residents of his own province approve of his performance.

Newfoundland Premier Dwight Ball sat down with Justin Trudeau in late November to discuss the ongoing Muskrat Falls project, among other issues like natural resources and unity. Ball is hoping to secure federal funds to mitigate increased power costs, which are expected to rise after the budget for that project ballooned to $6 billion over budget. Ball noted that it is “always a real pleasure” to meet with the Prime Minister. His approval, however, remains below one-third (31%).

Prime Minister Trudeau referred to Nova Scotia Premier Stephen McNeil as a “great partner in the federation” when the two met on December 10. Despite his positive relationship with Trudeau, McNeil continues to suffer from low approval in his own province. The Liberal leader has butted heads with unions in recent years, in efforts to tighten up government spending. Just 25 per cent approve of McNeil’s performance.

Trudeau must do better than joining Kenney in environmental cuts: Federal NDP

"The immediate days following a long weekend are when people can also unknowingly spread the virus to others....
Read more

Trudeau must do better than joining Kenney in environmental cuts: Federal NDP