ON the 66th death anniversary of Dr. B.R. (Bhimrao Ramji) Ambedkar, the family of the late artist, Shital Anmol, gifted a portrait of Dr. Ambedkar to the Centre for India and South Asia Research (CISAR) on December 6 at a ceremony hosted by Chetna Association of Canada in partnership with the CISAR and Ambedkarite International Coordination Society (AICS).

According to Wikipedia, Dr. Ambedkar (April 14, 1891 – December 6, 1956) was an Indian jurist, economist, social reformer and political leader who headed the committee drafting the Constitution of India from the Constituent Assembly debates, served as Law Minister and Justice Minister in the first cabinet of India’s first Prime Minister, Jawaharlal Nehru, and inspired the Dalit Buddhist movement.

“This is a very emotional moment for us today”, said Mrs. Sushil Anmol, the late artist’s wife, with tears in her eyes. She added that gifting the painting will make her husband happy and proud of his contributions.

Anmol’s paintings of Dr. Ambedkar were previously gifted to the Indian Consulate General in Vancouver, the City of Burnaby, and Guru Ravidass Community Center, where they are displayed with pride.

The gifting ceremony and paying of tributes were arranged by Chetna Association of Canada in partnership with the CISAR and AICS.

The Chief Guest, Consul General of India in Vancouver, Manish, spoke on Dr. Ambedkar and the impact of Buddhism on Dr. Ambedkar’s life. He also expressed his appreciation for having Anmol’s painting gifted to the Consulate General.

Jagjiwan Kumar, retired chief engineer with Punjab Urban Development Authority, attended as a guest of honour. Kumar expressed his gratitude to Dr. Ambedkar for creating opportunities that enabled him to integrate and succeed in his life.

Dr. Swaran Singh (visiting scholar at UBC), Zile Singh (former Indian ambassador), and Manjit Bains (Registered Nurse and Chair of Women’s Empowerment Committee for Chetna) and also shed light on the contributions of Dr. Ambedkar and his foresight on many of the key issues.

Harmesh Chander, Vice President of Chetna, shared updates on the Ambedkar International Symposium being planned for April 22 and 23, 2023, and urged people to visit www.ase2023.ca for more information. 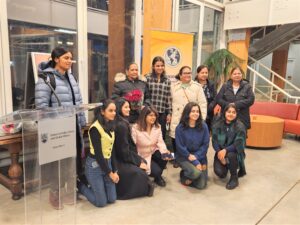 As December 6 also coincides with the École Polytechnique de Montréal massacre in 1989 where 14 women were killed and 13 others injured, a one-minute silence was observed as a tribute to these victims and many other women who face violence because of their gender. In Canada, December 6 is now observed as The National Day of Remembrance and Action on Violence Against Women.

The program was concluded with a song by Pamma Sunner, and a vote of thanks by Priti Narayan, Director of CISAR at UBC.

(Report on the Dr. Ambedkar Mahaprinirvan Day at UBC by Chetna Association of Canada)