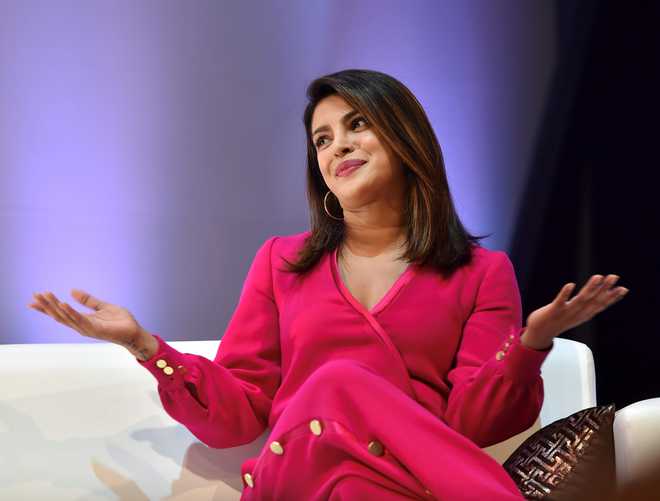 New Delhi (PTI): Priyanka Chopra may have had a dream run all the way from Bareilly to the American showbiz industry via Bollywood but says she is “greedy” and doesn’t want anyone telling her she can’t have it all.

The 35-year-old actor spoke on ’12 rules of becoming the best version of yourself’ while delivering the Penguin Annual Lecture at the packed Siri Fort auditorium last evening.

“I want everything. There’s nothing wrong with it as long as you’re not harming someone or doing something wrong. Don’t be scared to want more for yourself… I don’t want anyone to tell me I can’t have everything,” she said.

The former Miss World said she left Bollywood at the peak of her success to become a struggler again in Hollywood, where she has successfully established a parallel career.

“I want to dream of everything and I’ll have everything.

Be greedy, be hungry for your ambitions. Don’t live on someone else’s benchmarks. Who can tell you who you should be? Don’t let anyone or any situation dictate to you who you are and who you can be,” said Priyanka, who got her big break in the West with the TV show “Quantico”.

The actor was invited to deliver an address on the theme ‘Breaking The Glass Ceiling: Chasing a Dream’ in the 11th edition of the event by Penguin Random House.

Adding her own spin to the Cinderella story, Priyanka said, “Why do you want to fit into a glass slipper when you can shatter the glass ceiling?”

She said the term “breaking the glass ceiling” annoys her as it takes all her achievements and hard work and puts it “into a box”, defined by a largely patriarchal society.

“To be honest, it was never my mission to break the glass ceiling. All I wanted to do was chase my dreams, my ambitions.

I wanted to become the best version of me.”

The actor said one had to fight for one’s dreams as no one else would do so.

“Today I know my path is mine, the failures, successes mine. Don’t settle on your dreams.”

The National Award-winning actor said she hates failures but it is what one does afterwards that counts.

“When I fail in something that I do with all of my heart and mind, I don’t wallow in self-pity, I roll myself in it.

It’s not a pretty sight. But then I cry a little, I get up and dust myself off and dive straight back again as the only way to push failure aside is to move ahead. Not ignore it, analyse it.”

For those who don’t allow themselves to dream beyond their imagination, her advice is to “loosen up, let your dreams fly”.

The actor said one has to recognise opportunities and then give one’s best shot.

“There was never a plan. The universe was guiding me through it, all I had to do was make sure that I worked so hard that I squeezed every drop out of these opportunities.

“No matter where you are, you have never arrived enough to explore opportunities. There’s nothing wrong with being ambitious, ladies listen to me.”

She said people in the Hindi film industry had raised eyebrows when she played an antagonist in “Aitraaz” and when she chose to do a women-centric film like “Fashion” early in her career.

Priyanka said she knew her move to Hollywood would be “career suicide” if it did not work but that did not stop her.

“People have written me off several times in my career…

I went to do ‘Quantico’, when I was at the peak in my career here. The risks were huge, the stakes were high and the repercussions could have been, to say the least, career ending.

“But it was all worth it as I backed those risks with my 100 per cent.”