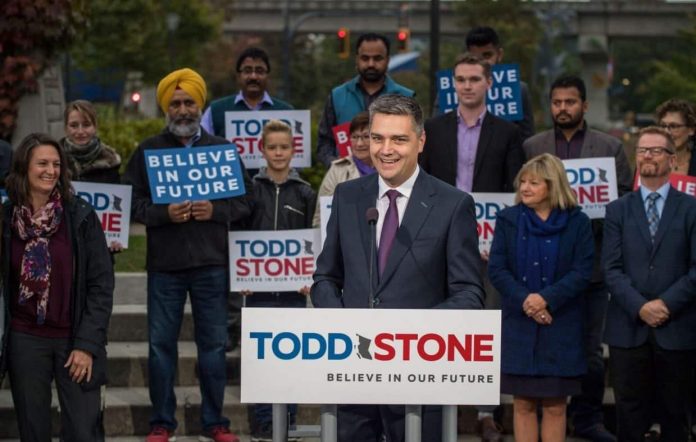 IT seems that the process of exploiting ethnic minorities that started with former premier Gordon Campbell and continued under former premier Christy Clark is still flourishing in the B.C. Liberal culture.

The Vancouver Sun reported on Friday on its website that B.C. Liberal leadership hopeful Todd Stone’s campaign has admitted that it was forced to cancel 1,349 memberships it signed up with improper email addresses.

Of course, Fassbender claimed that it was just “an error in judgment” and not something that was “malicious or with the intent to do anything untoward.”

The Sun reported that on January 26, the party questioned the authenticity of the memberships. Fassbender told the Sun that as soon as Stone learned of it, he asked about it and their team started to deal with it.

The rules committee of the party decided at a meeting that these memberships were invalid and the Stone campaign had no choice but to agree to cancel them.

The Sun reported: “The core of the allegations against Stone relate to his campaign allegedly registering domain names that it would use to then create numerous fake email addresses, which it would then assign to new members when registering them with the party. If true, the move could have theoretically allowed the Stone campaign to control registration on behalf of those members, collect their personal identification numbers from the party, and then vote on their behalf, which is not allowed under party rules.”

The Sun said that all this “raises questions about why Stone has spent several days publicly claiming his campaign had no more memberships disqualified than any other campaign, when it clearly had significant internal issues.”

The Sun reported that the Michael Lee, Dianne Watts, Mike de Jong and Andrew Wilkinson campaigns had co-signed a letter this week calling on the party to make public the allegations against Stone.

We will just have to wait and see what affect all of this will have on the leadership race, the voting for which kicked off at 9 a.m. on Thursday (February 1).

ON Saturday (February 3), we will know who the next leader of the B.C. Liberal Party.

The main show will be at the Grand Ballroom of Sheraton Wall Centre at 1088 Burrard Street in Vancouver on February 3 with doors opening at 4 p.m. and the program kicking off at 5 p.m.

At around 5:30 p.m., the first ballot results (if multiple ballots are required) will be announced. Results will be delivered ballot by ballot with brief intervals in between.

By 6:30 p.m., the final ballot result is expected to be announced, followed by the winner’s speech.

Liberals need someone with fresh ideas to retool entire party – not the present bunch of would-be leaders, says Kash Heed