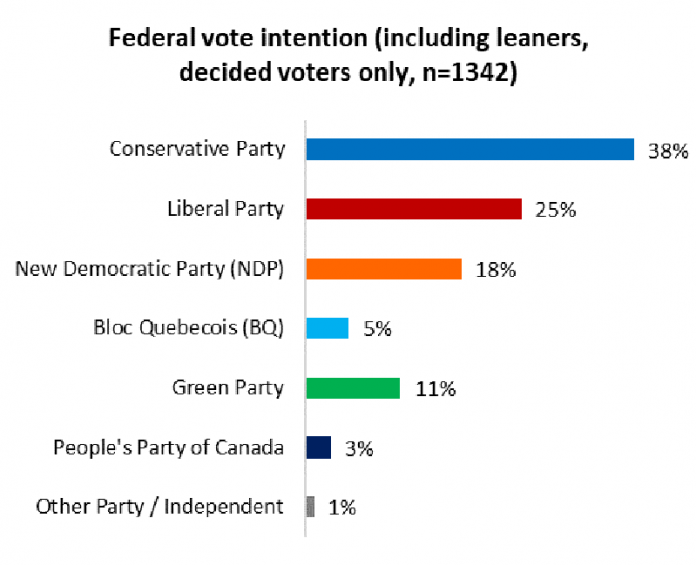 A new public opinion poll from the non-profit Angus Reid Institute finds that more than four-in-10 (44%) who voted for Trudeau’s party in 2015 now disapprove of the Prime Minister, and more than half (51%) now plan to vote for a party other than the Liberals – or are undecided.

While the Conservative Party of Canada (CPC) holds a sizeable lead among decided and leaning voters, it is the Green Party – fresh from a provincial-level breakthrough in Atlantic Canada – that is building up the greatest amount of proportional support.

Asked how they would vote in an election were held tomorrow, some 38 per cent of Canadians say they would cast ballots for the CPC, while 25 per cent would choose Trudeau’s Liberal Party. The New Democratic Party (NDP) is in third place with 18 per cent of decided and leaning voters backing it.

The Liberals have lost three more points in the last month, and the CPC and NDP sit largely unchanged. The Green Party, meantime, picks up three points among decided voters and now breaks into the double digits at 11 per cent. Fueling the Green surge – and bolstering the NDP outside of Quebec, where it is weakest – are disaffected former Liberal voters.

* Currently, one-in-three voters (35%) say that they are planning to vote for a party because they dislike another party even more and want to prevent that party from winning. This sentiment is equally high among Liberals (40%) and Conservatives (40%)

* Conservative Leader Andrew Scheer (40% approve, 46% disapprove), NDP Leader Jagmeet Singh (34% vs 45%) and Trudeau (28% vs 67%) all have negative net approval scores. Only Green Party leader Elizabeth May is approved of by more Canadians than disapprove of her (45% vs 34%)

* Once again, Canadians identify health care (24%) and the deficit (18%) as high priorities heading into the 2019 election, but environmental issues (27%) now top the list of priorities. Priorities vary significantly across generations and by party support.