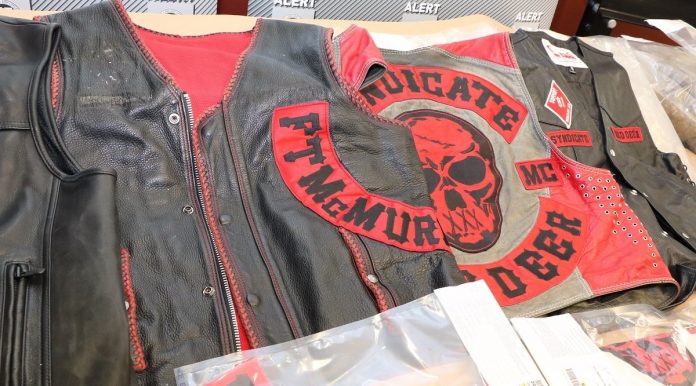 Project Rocker concluded on April 30, 2019, after three suspects were arrested. An estimated $350,000 worth of drugs was seized, along with firearms, motorcycles, and cash.
Three Red Deer homes were searched and the following items were seized:

ALERT alleges that members of the club were involved in an extensive drug trafficking network that operated in the Red Deer area. Casey Chapin and Joel Befus are both full patch members of the support club and have been charged with conspiracy to traffic cocaine, along with a range of other offences. Bailey Chapin, a 29-year-old woman, was also charged.
Police say support clubs are typically utilized to carry out lower-level dirty work for the Hells Angels, such as drug trafficking and expanding territory to secondary markets. The Nomads chapter of the Hells Angels is based in Red Deer.
Project Rocker utilized a number of police investigative techniques and strategies, with the investigation beginning in April 2017. ALERT received assistance from Red Deer RCMP, Innisfail RCMP, and Alberta Sheriffs surveillance team.
Casey Chapin, 33, is charged with:

Bailey Chapin, 29, is charged with:

Both Casey and Bailey Chapin were released on bail after their initial court appearances. Befus was also released on bail with numerous conditions.
Members of the public who suspect drug or gang activity in their community can call local police, or contact Crime Stoppers at 1-800-222-TIPS (8477). Crime Stoppers is always anonymous.