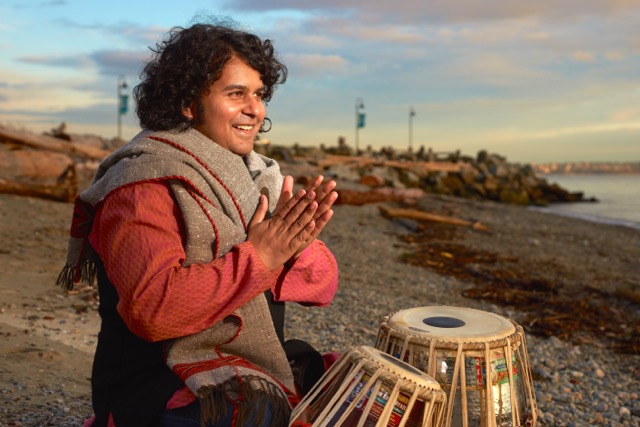 “To our Vancouver fans, I’m thrilled to announce Drum Heat is back!” says Sal Ferreras, Founder and Conductor of Drum Heat. “For the first time since 2010, we are delighted to bring this electrifying showcase downtown. Audiences will be treated to an irresistible program filled with music in the rich traditions of Brazillian samba, son cubano, Indian tabla, and much more, all to support Arts Umbrella and its mission to inspire creativity in future generations.”

As a passionate proponent of artistic collaboration and education, Sal Ferreras staged the first Drum Heat concert in 1986. Since that time, this beloved event’s lineup has expanded to include an eclectic mix of performers. Drum Heat 2017 will feature an impressive list of BC musicians, many of whom are award-winning, and in-demand internationally: Celso Machado (guitar, percussion, vocals), Miles Black (piano), Jodi Proznick (bass), Toto Berriel (percussion and vocals), Cassius Khan (tabla and vocals), Paul Bray (percussion), Liam MacDonald (percussion), John Korsrud (trumpet), Tom Keenlyside (saxophone), John Reischman (mandolin), Raphael Geronimo (drum set and timbales), Niho Takase (piano). This year, for the first time, the program will include the powerful, youthful voices of the 20-member Sarabande choir in several captivating collaborations.

Leading this heart-pumping evening,  Sal Ferreras will perform percussion, vibes, and vocals. An elite musician, Ferreras has been called to play on a series of JUNO and GRAMMY-Award winning recordings. With a PhD in Ethnomusicology from the University of British Columbia, Ferreras is a highly sought-after expert in drumming, and world music. His love for connecting musical minds has brought him as far as Australia, China, Czech Republic, Germany, Portugal, Taiwan, and all over North America. With his many staggering achievements, Ferreras was inducted in the BC Entertainment Hall of Fame in 2002,  and was honoured in 2010 with the City of Vancouver Mayor’s Award for Music.

As part of his work to benefit the community through the arts, Ferreras contributes net proceeds of Drum Heat to directly support Arts Umbrella programs. Three out of five Arts Umbrella students need financial assistance to access arts education. Through the generous support of audiences who attend Drum Heat, the funding from the concert reaches more than 12,000 young people each year.