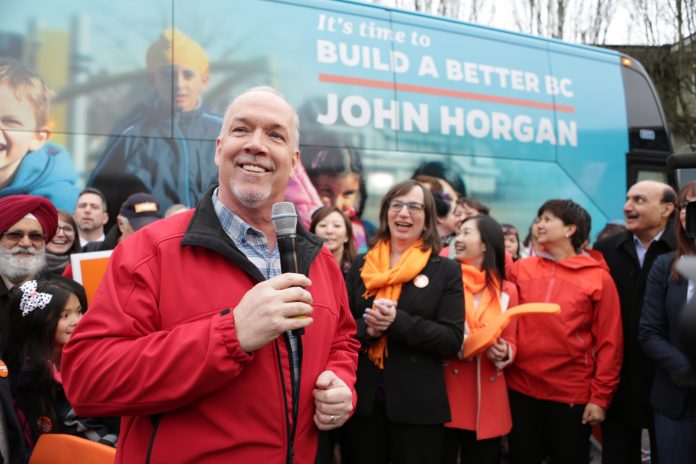 BC NDP Leader John Horgan kicked off the BC NDP campaign on Tuesday morning revealed the campaign bus that will carry his tour from now until election day.

Horgan was greeted by supporters and a team of Lower Mainland candidates at the BC NDP’s Vancouver regional campaign office.

“This campaign is about building a province that works for real people, not just the wealthy and well-connected,” said Horgan.

“While [Premier] Christy Clark spends her time with big donors and the people at the top, we’ll be travelling to communities across BC, meeting with real people and talking about our plan to make life better for families.

“After 16 years of BC Liberal neglect, families are paying more fees than ever for fewer services. Good jobs are harder to find. And they’re waiting longer for the services we all depend on, like health care and education.

“Throughout this campaign, you can count on us to be tough on Christy Clark’s record. We will remind voters of the choices she made that have hurt people, and we’ll contrast that with our vision for a better BC that works for you.

“As we kick this election campaign into high gear, I’m looking forward to meeting people from all walks of life and sharing our vision for building a better BC.”

Horgan pledge to BC: ‘We’ll get through this, together’

Horgan: British Columbians have an important choice to make

BC NDP to build first ever South Asian Museum in BC