B.C. Premier John Horgan continues to be one of the most popular provincial leaders in the country, approved of by 55 per cent of residents, according to the latest Angus Reid Institute poll.

New BC Liberal leader Falcon is not a new face to the B.C. political scene. The three-time MLA was a cabinet minister and deputy premier in the Liberal government of former Premier Gordon Campbell. He also narrowly lost a previous Liberal leadership election to Christy Clark in 2011. However, he has been out of politics since 2013, when he decided not to seek re-election.

Falcon will have more than two years to re-introduce himself to B.C. residents before another provincial election is scheduled. Currently, 35 per cent say they have no opinion of him: The B.C. government is among the most praised provincial governments for COVID-19 management. Outside of Atlantic Canada, the BC NDP fares best in the country. The government also fares well on assessments of jobs and education. That said, housing affordability continues to be a massive source of concern and criticism for residents: 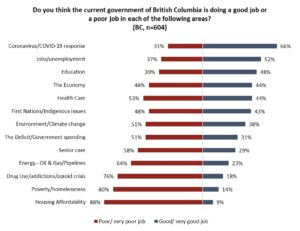 BC Liberals lag behind NDP