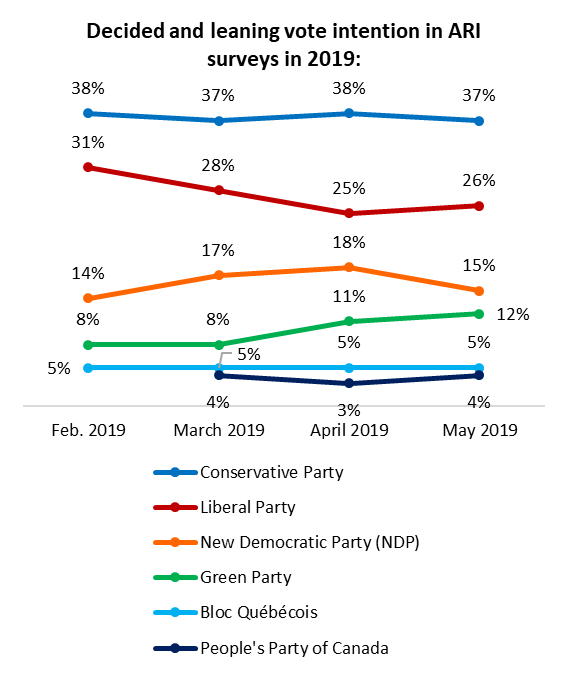 NOTWITHSTANDING a summer sitting of the House of Commons, these will be the final days for MPs in Ottawa before returning to their constituencies to fight for their political futures in the federal election campaign this fall.

The latest analysis of new polling data from the non-profit Angus Reid Institute suggests that for Liberal candidates, a disastrous slide in support over the first half of the year appears to have ended, making this a critical – albeit shrinking – period of time to try to regroup and rebuild.

Conservatives, meanwhile, will take comfort in maintaining a wide lead over the governing party, but must be mindful of a failure to build momentum as their opponent plummeted.

Indeed, 37 per cent of decided and leaning voters say they would cast ballots for the CPC if the election were held tomorrow, a number that is statistically unchanged from where it has been since the SNC Lavalin scandal first hit the headlines back in February.

For the second straight month, the Liberals hold the support of roughly one-quarter of Canadian voters (26%), still well below the 31 per cent they recorded in February, but no longer dropping month after month.

The Liberal decline has benefitted the Green Party, which sees its support among decided and leaning voters reach 12 per cent in this survey. This comes as more Canadians identify the environment and climate change as a top issue facing the country.

That said, sizeable numbers of Green and New Democratic supporters list the Liberals (and each other) as their second choice. Whether Prime Minister Justin Trudeau’s party can win any of these voters over will be one of the defining narratives of the fall campaign.

Read the rest of the story here: www.angusreid.org/federal-issues-june2019