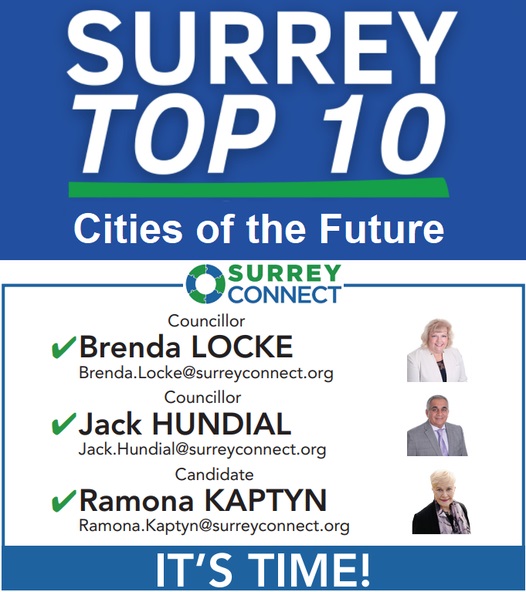 SURREY Councillors of the so-called Surrey Connect group, Brenda Locke and Jack Hundial, need to learn how to behave a bit ethically and stop misleading people – no matter how desperate they may be to try and bring down Surrey Mayor Doug McCallum who keeps on winning one accolade after another even as his miserable opponents keep trying every trick in the book to trip him up.

VOICE readers are well aware of the raft of awards the City of Surrey has been receiving at every level – international, national and regional. The latest was national recognition from Intelligent Transportation Systems Canada (ITS Canada) for excellence in Intelligent Mobility (June 21). (http://7zi.e17.mywebsitetransfer.com/surrey-wins-intelligent-transportation-systems-canada-award/)

The credit, of course, goes to McCallum and his Safe Surrey Coalition that control the majority in Surrey Council. That’s the way democracy works.

And just a few days before that, on June 18, Surrey was ranked by the Financial Times’ fDi Intelligence division among the Top 10 Mid-Sized Americas Cities of the Future. Surrey ranked eighth and this marked the second time Surrey had ranked in the Top 10, rising two spots from 2019/20. (http://7zi.e17.mywebsitetransfer.com/surrey-ranks-among-the-top-10-of-the-cities-of-the-future/).

Isn’t that a bit slimy?

If you have even an iota of decency, you should take down that post and apologize, Brenda and Jack.

Come on, guys, we know you are desperate, but you should learn where to draw the line. We know you won’t admit it – because that is what you are all about, aren’t you?

And talking about where to draw the line, stop making fools of yourselves along with the rest of that desperate pro-RCMP group that has no chance of sabotaging the new Surrey Police Service with that farce of a referendum. (Who’s making money out of organizing that even though they know they are going to lose, by the way?)

Are these people so dumb that they just don’t get it?

Surrey-ites voted for McCallum and the Safe Surrey Coalition who had promised to replace the RCMP with a municipal police force.

Then, Surrey-ites re-affirmed their support when the BC Liberals and the pro-RCMP forces made the new Surrey Police Service an issue in last year’s provincial election by not only re-electing ALL the NDP MLAs but also KICKING OUT one BC Liberal MLA (poor guy made an ass of himself!)

But even after all that, we are now going to have a farce of a referendum that has no chance of success.

Not only that, but even if it were to prove to be a roaring success (oh sure, dream on!), the provincial government can just reject it – as it surely will because it is fully supportive of the new Surrey Police Service.

Now, where is that box of tissues?