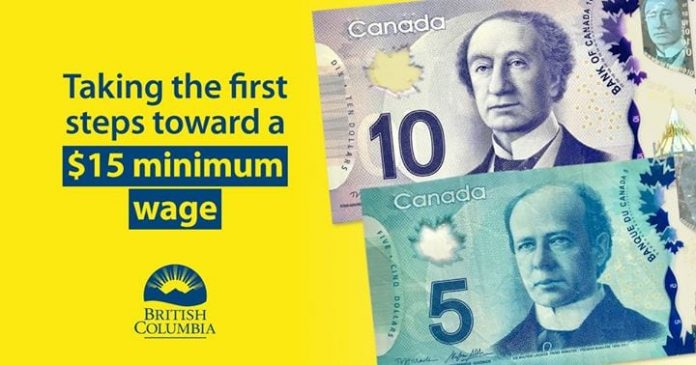 THE provincial government is making its first move toward a $15-an-hour minimum wage for British Columbia by announcing a 50-cent increase for September and renewing its commitment to a fair wages commission.

In making the announcement on Tuesday, Premier John Horgan said moving over time to a $15 minimum wage is long overdue in making life more affordable for British Columbians.

“British Columbia’s lowest-paid workers need a raise,” Horgan said. “The action we’re taking will make life better for working parents, seniors, new Canadians, students and more — these are people struggling to get by.”

Effective September 15, 2017, minimum-wage earners will see their pay increase to $11.35 per hour from $10.85 per hour, giving B.C. the third-highest minimum wage among Canada’s provinces — up from seventh position.

“Today’s increase and our commitment to the $15 minimum wage will benefit almost 100,000 British Columbians who have been getting by on one of the lowest minimum wages in the country,” said Horgan, adding that 62% of minimum-wage earners are women.

Labour Minister Harry Bains said details around a fair wages commission’s composition and terms of reference will be announced in the coming weeks, but that its overarching objective is to get British Columbia to $15 along a planned, responsible path. The commission will submit its first report within 90 days of its first meeting.

“We’ve listened to business owners, who have told us gradual, predictable increases are the way to go to minimize the impact on their businesses,” Bains said. “And they recognize that the move to a $15 minimum wage is good for retention for their businesses, and good for the B.C. economy.”

At the same time as the general minimum-wage increase, the liquor servers’ wage is also rising by 50 cents to $10.10 per hour. Other minimum-wage provisions in the employment standards regulation will also receive increases in line with the general minimum-wage increase of 4.6%. This includes the daily rate for live-in home support workers and live-in camp leaders, as well as the monthly rates for resident caretakers and the minimum farm worker piece rates for harvesters of certain fruits and vegetables.

ANDREW Weaver, Leader of the B.C. Green caucus, pointed out that the establishment of a Fair Wages Commission was a key element of the B.C. Greens 2017 election platform and was included in the Confidence and Supply Agreement (CASA) signed by him and Premier John Horgan.

He added: “Although I am pleased to see an important piece of our agreement move forward, I am concerned that the apparent addition of a 2021 timeline is prejudicial to the work of the Fair Wages Commission. The Commission falls under the Confidence and Supply Agreement between the BC NDP and BC Green caucuses. The 2021 timeline had not been agreed upon and is, in fact, contradictory to the intention of depoliticizing the Fair Wages Commission.

“The Fair Wages Commission should determine the timeline for minimum wage increases based on evidence and through consultation with stakeholders. The Commission must consult with small businesses, which are the backbone of our economy, to ensure they can continue to thrive. The timeline and wage increases should not be made for political purposes and should not be arbitrarily set in advance.

“British Columbians are facing skyrocketing costs of living and increasing income insecurity as the economy changes rapidly. Minimum wage is just one way we can move towards all British Columbians having a livable income. The Fair Wages Commission must be empowered to make recommendations at arms-length based on evidence to ensure that wage increases create better income security for all British Columbians.”

Premier Horgan: “We have accomplished a lot for people in just five years, but there is still more to do”