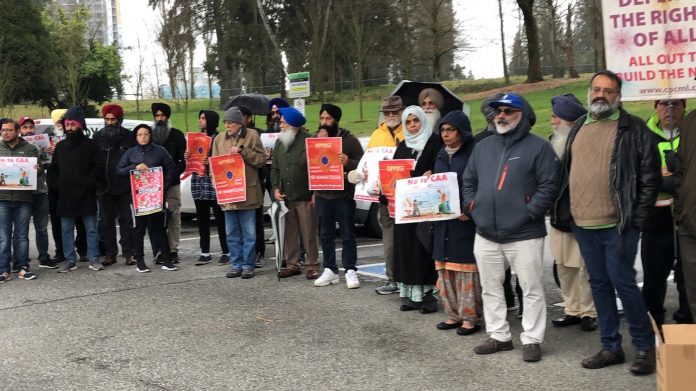 NEW Westminster Councillor Chuck Puchmayr on Sunday told a rally held against India’s Citizenship Amendment Act (CAA) and the recent violence that claimed more than 40 lives in New Delhi that he was determined to bring a motion against the CAA in the City Council on Monday, March 9.

Puchmayr, who was MLA for New Westminster and has been elected councillor several times, announced that he will be bringing a motion to denounce CAA and urge the Canadian government to break its silence over what was happening in India.

Scores of people participated in the rally organized by Indians Abroad for Pluralist India, the rally at Holland Park in Surrey.

The Hindu nationalist Bhartiya Janata Party (BJP) government in India recently passed the CAA that discriminates against Muslim refugees coming from neighbouring countries, including Pakistan, Afghanistan and Bangladesh on the pretext of giving shelter to non-Muslims facing religious persecution in those places.

There have been angry protests against CAA all over the world. The recent demonstrations by the BJP supporters against peaceful protesters in Delhi culminated in bloodshed that left more than 40 people dead. Most of these deaths were the result of mob attacks incited by BJP supporters with the help of police.

The rally began with a moment of silence for those who were killed.