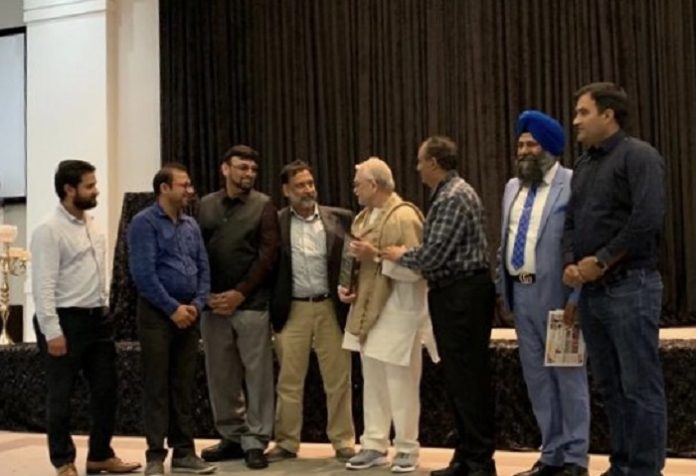 LEGENDARY director, lyricist and poet Gulzar from India was presented a lifetime achievement award by the Indians Abroad for Pluralist India (IAPI) for keeping the flag of secularism high under right-wing nationalist threats.

According to Wikipedia, Gulzar was awarded Padma Bhushan in 2004, the third-highest civilian award in India, the Sahitya Akademi Award and the Dadasaheb Phalke Award — the highest award in Indian cinema. He has won several Indian National Film Awards, 21 Filmfare Awards, one Academy Award and one Grammy Award. He also wrote the theme song for Motu Patlu, an Indian animated sitcom.

Gulzar also wrote poetry, dialogues and scripts. He directed films such as Aandhi and Mausam during the 1970s and the TV series Mirza Ghalib in the 1980s. He also directed Kirdaar in 1993, according to Wikipedia.

Gulzar made the first ever Hindi film on Sikh genocide and has penned short stories and poems on related topics often inviting the wrath of right-wing trolls.

Released in 1996, Maachis is the story of Sikhs who suffered state-sponsored violence during the 1980s. It was a first honest attempt of any Bollywood director to look into the inconvenient truth of 1984 and the subsequent events that devastated the Sikh minority.

In June, 1984 the Indian government ordered the military to attack the militants in the Golden Temple complex. The army operation left many worshipers dead and important historical structures destroyed. As a result, the then-prime minister Indira Gandhi was assassinated by her Sikh bodyguards on October 31, 1984. Her murder followed state engineered mob violence against the Sikhs in different parts of India. In the national capital of New Delhi alone, close to 3,000 Sikhs were slaughtered.

Maachis had used the imagery depicting that violence. The story revolved around young Sikh men who were forced to join militant ranks in response to state repression.

Gulzar had received lot of backlash from the Indian police and right-wing politicians at that time.

IAPI that was formed in response to the growing attacks on religious minorities in India had resolved to honour Gulzar on his first visit to BC after the release of Maachis.

In fact, right-wing fanatics tried to intimidate on social media after he voiced his concerns over the present situation in India where diversity is under constant attack.

Members and supporters of IAPI presented him with the plaque on the sidelines of a civic reception organized for him by Kamal Videos in Surrey on Monday night.