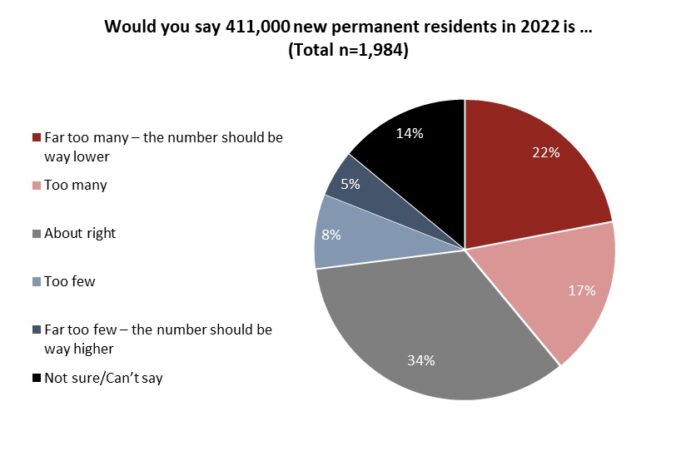 PUBLIC health, economic and perhaps even electoral outcomes pending, the Canadian government has signalled it plans to land more than 400,000 newcomers next year.

New data from the non-profit Angus Reid Institute in partnership with the University of British Columbia finds Canadians divided along age, gender, and political lines about whether that number represents an appropriate target.

On the other hand, a plurality of 39 per cent feel that the target is too high. This proportion rises to a majority in Alberta (50%) and Saskatchewan (54%) and is the opinion of nearly two-thirds (64%) of past Conservative voters.

One-in-eight (13%) Canadians say the 411,000 target is not ambitious enough, rising to one-in-five among past Liberal and New Democrat voters.

As to which regions of the globe Canada should prioritize for new permanent residents, three-in-five Canadians say that it does not matter to them, and that no region should have priority over another. One-quarter (26%) prefer Europe, while one-in-five (20%) say the United States and Mexico. Immigration from South Asia is chosen by just four per cent, a finding starkly contrasted against the fact that Canada’s largest source of immigration is currently India.

Canada has welcomed over 108,000 new permanent residents so far this year

Up to 30,000 additional applications will be accepted for 2021 Parents and Grandparents Program