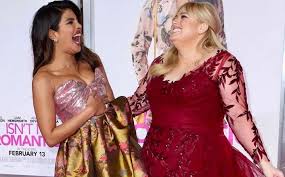 Mumbai (IANS): Actress Priyanka Chopra has praised actress Rebel Wilson and said that it is amazing to see a woman in Hollywood, star in a movie of her dreams.
Priyanka on Tuesday took to Twitter where she shared a photograph of herself along with the cast of “Isn’t It Romantic” and her husband Nick Jonas.
“Happiness and love all around. So proud of you Rebel Wilson. It’s so amazing to see a woman in Hollywood literally make and star in a movie of her dreams. ‘Isn’t It Romantic’,” she captioned the image. ”Isn’t It Romantic” tells the story of a New York architect Natalie (Wilson) who works hard to get noticed at her job, but is more likely to be asked to deliver coffee and bagels than to design. Priyanka essays the role of a yoga ambassador.
“Isn’t It Romantic” will release on all Netflix territories outside of the US and Canada — where it will open in theatres.
The romantic-comedy, also featuring Wilson, Liam Hemsworth and Adam Devine, will premiere on February 28 in India.